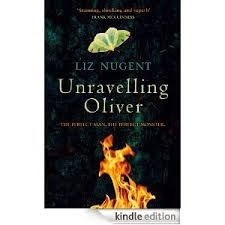 ‘I expected more of a reaction the first time I hit her.’

Straight away I was intrigued.  [The first time I hit her] implies a history of domestic violence but by the end of the first chapter, it is revealed the first time Alice was hit once by her husband Oliver, he went to the pub and later on that same evening he beat her into a coma.

Oliver’s story is then revealed bit by delicious, tantalising bit through the narrative of several characters; Barney, Michael, Moya, Veronique, Eugene and Oliver himself.

I became totally immersed in the story and whilst I believe no one person is 100% evil, there is good in everyone,  Oliver was a despicable character.  At the same time as a mother, my heart went out to him as a small boy and personally it is this part of his story that made him human and not the monster whose actions caused such devastation.

I saw drama and suspense in the way every character was affected by Oliver even though some were unaware of this until the end.

A skilful tale, brilliantly told with lots of suspense throughout and some real tense moments.

I am delighted to have been given the opportunity to ask Liz a few questions about her book.

Hi Liz.  Thank you for this opportunity.  I really enjoyed your book.  Tell us a little about yourself and your background.
“I was born and bred in Dublin, Ireland, number five of six children though my Dad went on to provide me with three more sisters from a second relationship so actually I’m slap bang in the middle of nine children: four brothers and four sisters, and I adore all of them. I spent a few years in London in my late teens, trying to prove I was a grown-up. I did all kinds of jobs there- I was a buyer for a construction company, an administrator in a dole office, a clerk in a hospital medical records office and a really terrible waitress. Prior to writing this novel, I mostly worked in Irish broadcasting and theatre, but always behind the scenes, as a Stage Manager in theatre and as a Production Co-ordinator, Script writer and Story Associate in television and radio.”

What were you like in school?  I am always interested to hear if authors I enjoy liked English for example.  Was there a particular teacher who encouraged your talent?
“I was a really bad student. I loved primary school but from the age of about 13 onwards, I completely lost interest. All of my school reports said ‘must try harder’ and ‘must not distract others’. I was a total messer and rarely did my homework. I had a path worn to the headmistress’ office to explain myself and was fined for smoking several times. I don’t blame the school. Adolescence hit me particularly hard and I was a quite unhappy teenager. I distinctly remember at age 13 thinking ‘I have a full four years to go here!’ It was a prison sentence to me. I didn’t do very well in any subject though the nun who ran the library used to recommend certain books to me, even though she confiscated others! I was a big reader.”

I have to say, Oliver was fascinating.  He drew me in straight away!  How did you come up with his character?
“I knew someone who was very intolerant and impatient and who I thought might be capable of violence so I tried to write from that person’s point of view, but then I got carried away and made Oliver a lot worse. But it wasn’t possible to write such an character without at least trying to justify all his actions from his point of view.”

What about Eugene?  I found his chapter to be one of the more heart breaking.  Which character did you enjoy voicing most?
“Eugene was good to write because, despite his learning disability, he was the only one who saw right through Oliver. Oliver never bothered to hide his true nature from Eugene because he didn’t think “an imbecile’s” opinion would matter. But Barney is my favourite character. Barney loved and lost and sacrificed the girl he loved because he thought she deserved better. Poor Barney!

I really enjoyed how the story came together through the character’s narrative.  The reader doesn’t hear Alice’s voice through a chapter.  Was this always your intention?
“Alice is in a coma from the first page, but I did at one stage have her voice in a letter she had written to Barney before Oliver’s attack. Unfortunately, it didn’t add any new information to the story so it had to go. She did however tell Barney that she’d made the wrong choice.”

What is your favourite part of the writing process?
“Strangely, I enjoyed the editing process. I know a lot of writers find that tortuous and maybe I got lucky with a good editor who understood exactly what I was trying to do. Up until now, I’ve never had anybody take such an interest in what I’m doing and treat it as really important. I found it flattering!”

And finally, when can we expect the next novel?  I for one cannot wait.
“Neither can I. I’m only three chapters into a first draft so it will be a while...

Thanks for the great questions!”


Liz Nugent worked as a stage manager in theatres in Ireland and toured internationally.  Most recently Liz has written extensively for radio and television drama including RTE’s Fair City.  She has been shortlisted for the prestigious Francis McManus Short Story Award.  Unravelling Oliver is her first novel and is published by Penguin Ireland.  It will be available on 6th March 2014 retailing at €14.99.
at 19:02