Inside Out. A Mini Review 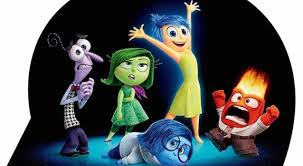 FOR THE THIRD time since I became a parent, I helped one of my boys say goodbye to his fifth year and welcome his sixth.

In other words there was a birthday.  In other words I shoved chocolate cake at him, bought him a pair of swimming goggles and promised him a trip to the cinema.

Inside Out, the latest offering from the Disney Pixar stable had just been released and my boys were chomping at the bit to go see it.

Thanks to the newly turned six year old’s aunties that became an immediate happening when they presented him with a cinema voucher for his birthday.

Inside Out is a rather clever vehicle for explaining core memories and emotions to kids, including an important message for parents towards the end.  As is the ability of only the best movies, there is something for everyone in this one.

Riley Anderson is the young girl whose head provides the headquarters for five emotions, joy, fear, anger, disgust and sadness.  These feeling guide her through a house move and a new school.

Joy is the dominant emotion; a bright yellow sprite bathed in an ethereal light.  Upbeat, eternally positive, always looking on the bright side of life to the point of exhaustion and quite frankly, she's hard work.  Was it just me or did anyone else want to punch Joy in the head at times? 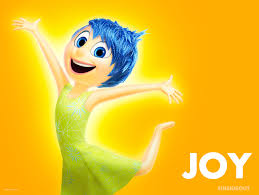 Fear is painted purple and a feature I really liked about this character was he, (wonder why they gave emotions gender. And how did they decide which one should be male or female. Hmmmm) was never too much in the forefront.  He jumped in at certain junctions but never took over.  I liked that. 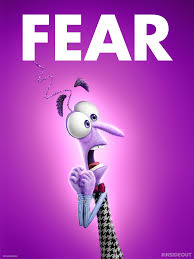 Anger, as you can expect, is bright red with regular tendancies to blow his top.  (Another male)  Anger was responsible for taking the movie and Riley in another direction altogether when he decided to make her run away back home to Minnesota to create new core memories. 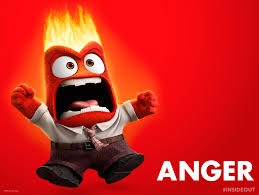 Disgust (a lady) had bags of ‘tude and the colour green to match.  Think “eewwww” with a sneer, jutting hip and you’ve got the picture. 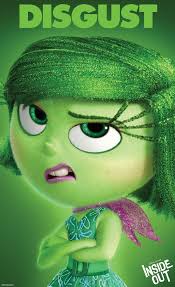 We cannot forget sadness.  The most, I think anyway, important emotion in the movie.  For all her blueness she played a pivotal part in portraying the main message which is, it’s ok not to be ok.  Big, huge message.

I tried not to bombard the boys with questions on the way home about what they thought of it.  I was kind of hoping they saw more than a movie and a bucket of popcorn.  Interestingly enough, none of them wanted to punch Joy like I did, (I phrased the question slightly differently) but they all liked sadness.  And that was enough for me.  They also strongly identified with Anger.  Something for me to think about maybe.

And all of them wanted a Bing Bong.  What’s a Bing Bong?  Well, you’ll just have to go along and find out, won’t you?

Maybe take a few tissues with you as well.  If Inside Out doesn’t pull on your heart strings, the short film about volcanoes before it will. 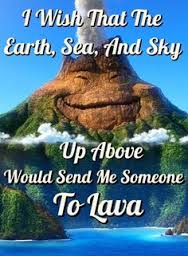 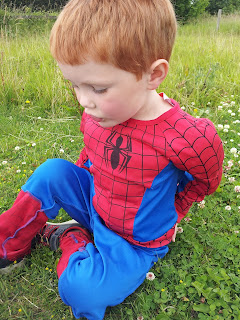 Shit happens. Over and over again.  In our house the four year old can fall asleep at the drop of a hat.  And nothing short of dumping him under a freezing cold shower will wake him up.  Then, of course, I would have to contend with the mother of all tantrums from hell.

Understandably.  Sometimes, it’s easier to give in and let him sleep.  Especially after I have been dragged around the garden and regaled, in minute detail, about his Dinosaur Tour.  It’s kind of amazing really.  It’s as if he can see the creatures such is his imagination.  But often times I need a break.  He’s amazing.  But he’s exhausting.  So shit happens.  Shit in the form of letting him sleep at very very wrong times of the day. Hey.  I pick my battles.

The four year old likes to talk.  And has a very active imagination.

It tires him out.

He likes to sleep. For about three hours every other day.  Some days he may not crash till 4PM.

I do my best to keep him awake.  Regaling him with boring shite about what we did that day and the like.  I have been rewarded with an irritated swat for my troubles.

He’ll be gone for three hours.  Tops.  Even at that it’s hard to wake him.  He likes to lie there for several minutes making sure his “large batteries” are fully charged.

I get him downstairs. Finally.

He likes a cuddle for another ten minutes or so.

He hops down off my lap and returns to his exhausting play.

Trouble is, it’s almost 9pm.  The others must go to bed.

The futile act of teeth brushing and night time attire begins.  Futile because I know the four year old has a further five hours in him before he will fade again.

Did I mention 9pm already?

They are all herded up the stairs nonetheless

The next two hours sees both parents take turns to go up and issue serious and dire idle threats.  All aimed at the four year old who is doing his living best to keep the others awake.

Finally there is silence.  The four year old is still awake though.

I haul myself off to my own scratcher at 11pm.

“I can’t sleep without you.”  The four year old is upside down and wide awake on his bed.

He’s been waiting for me.

I cave and crawl into the bottom bunk bed with said four year old and tell him I am desperately tired and need to recharge my own batteries.

A small forehead is pressed against mine, a tiny arm flung across my neck as I slip into deep sleep.

A gentle kiss on my nose.

“I did!  I am a Indominus Rex and you must run. RAAAARRRRRR!” 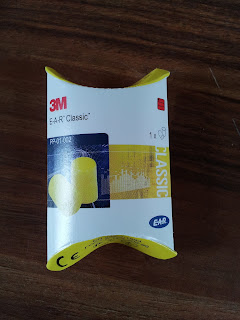 I am not perfect.  Despite everything and everyone saying otherwise, I have my faults.  Yes, it’s true.

For example I have this little white lie that I wheel out to the kids every now and again.

They have this propensity to approach me every time I sit down.  They don’t care for the fact I might have a steaming cup of tea in front of me and am taking ten minutes to catch up on emails.  Ok, ok, catch up on Facebook.  You caught me.

It’s like there is this alarm button on my seat that goes off every time my rear makes contact and suddenly one or two of them require urgent nourishment in the form of food, bathroom breakdown assist, and remote control location or just feel like coming over and touching me or something.

So I do this thing where I tell them that I am glued to the chair and the glue will not dissolve until my tea is finished.

They laugh but it seems to work.

This week I turned it up a notch and did something I had been threatening for months.

We were just back from Rosslare and something weird happened.  I’ve experienced it before but this time it seemed bigger.  I was wrecked.  I couldn’t focus on anything.  I wasn’t able to concentrate.  I felt like I was on the outside of my body all of the time.  And the noise!  Even when they were quiet the noise was magnified.

So I went to the chemist and bought two packs of ear plugs.  Basic little squishy foamy ones that you roll between your fingers to taper out and then pop into your ear.  They unfold or swell until your ear cavity is filled.  The noise levels are deadened or muffled but you can still hear everything.  Just not at such high volumes.

They’re great.  Especially if I put earphones on over them.  They really helped.

And the cool added bonus is, they are bright yellow and it is quite obvious that I have them in.  When the boys see them, they know I am deliberately tuning them out and need my space.

Of course they still come over to “have a go” of them.  Smallest Boy thinks when he wears them, I can’t hear him.  Much the same way he is of the belief that if he covers his eyes, he’s invisible to others.

If anyone knows of such earplugs – the ones that kids wear so their parents can’t hear them, those ones – can you let me know?

Or is that called a mute button?

I’ll take four of those too actually.

So anyway, ear plugs.  They actually do deaden the pain.  Get some.

Ear plug pro’s
They deaden all the sounds.  Important note- deaden not kill.

Summer Holidays to the Beach Countdown 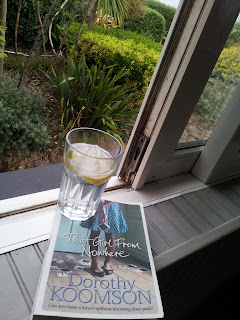 Day 1 observations:  I am beginning to hate the word "Mammy."  I am that mother who buys her kids super soakers but refuses to fill the baby bath with water.  Never mind.  I availed of the wine special offer at the supermarket.

Day 2 observations:  I have hidden the Xbox controls but the little fuckers keep sneaking the tablet.  One boy has taken the top off his toe – think boiled egg – I’m pretty good with steri-strips so he’s grand.  Never mind.  There’s lots of wine left.

Day 3 observations:  I am also that mother who allowed her 4 year old to sleep for three hours but dragged the 6 year old off the couch to prevent him from nodding off.   Wine will dull that forthcoming pain.  Mine.  Not his.  I’m not that bad!

Day 4 observations:  yes, I am she.  She who has all of the uniforms washed and packed away for next year.  The school books are bought, covered and in the (washed) schoolbags too.  The boy who needs red pens has those and the boy who needs glue sticks (all of the boys) have those too.  I am on fire this summer.  I intend to continue to be smug with a glass of wine.  There’s still some left.

Day 5 observations.  My apologies Sally Hansen, I am a fickle friend.  I have discovered Cocoa Brown and I think I la-la-la-like it.  In fact I love it.  If you are ghostly white like me, you can get away with leaving it on overnight and not end up oompa-loompa’d the next day.  And it does last for the promised 5 days.    The wine’s all gone.

Day 7 observations.  Excitement levels are off the Richter scale.  Today is the day we are going on our summer holidays to Rosslare, Co. Wexford.  Our Juno girly has emptied her bladder all over the place from sheer excitement/stress.  She cannot come with us.  Where is the wine when I bloody well need one???

We’re here.  We’re actually on our holidays and the reviews are in less than 6 hours after arriving. 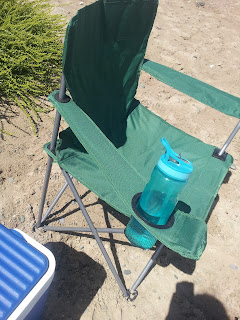 “You are the best mammy and daddy in the whole world. Thank god I’m your child.”
“This is the best holiday ever!” (We had just gotten out of the car.)
And finally “Awesome! Awesome! Awesome!”

Cripes.  No pressure then...