Nothing Black About This Black Friday 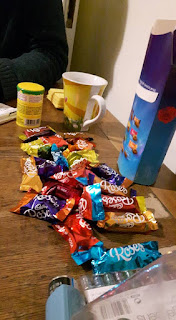 Last evening I read a lovely blog post by Office Mum called Name Your Poison and in it she speaks of reward systems, the little sweetener we promise ourselves to help the week go faster.

And it got me thinking.   Hard.  I realised I don’t treat myself nearly enough.   Yes, I buy frothy cappuccinos now and again.  I cannot pass Penney’s without a little something frivolous and every so often, I will buy a book I like the sound of.

But in general, these are sporadic spoiling’s.   it occurred to me that I have three things I am quite looking forward to this evening alone and that makes it even better.  Three delights in one day.  I really must do that more often.

I mentioned reading so the first thing I am looking forward to is starting a book from my childhood called The Dolls House by Rumer Godden. 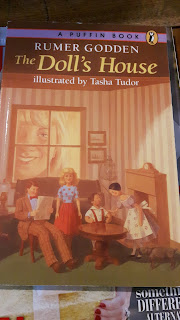 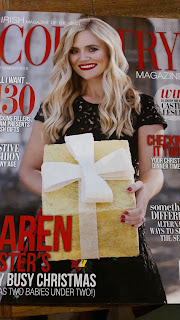 As young readers, my sisters and I took it out of the library every now and again to reread.   I loved it.   The peculiar thing, however, is I couldn’t remember the name or even much about what happened in the book despite having read it several times.  In a most serendipitous event, it popped up on in conversation on Facebook recently and who am I to ignore serendipity.  It arrived yesterday.  I will throw one of my favourite magazines into the mix as well.  I buy this one every month for a little bit of light reading.   When I buy a magazine, I flick through it first to see what’s on offer.   Maybe even a second time and then I will select the articles that speak to me most.  After that I will dip in and out until I’ve read it cover to cover.  Reading.  Is there a more enjoyable pastime?  I don’t think so.

Except maybe chilling out in front of a favourite TV show or series on Netflix.   Do I have to mention Gilmore Girls: A Year in The Life? 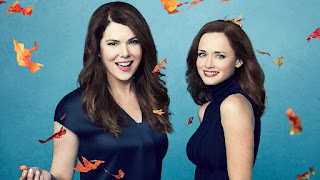 Are you sick hearing about this Netflix revival yet?  It seems the whole world has been waiting for the four feature length episodes, and as of 7am Irish time, they have arrived.    I binge watched the original series on Netflix over the past three months and occasionally when the boys saw I couldn’t be budged from the couch for love nor money, they would plop down beside me.    Soon they became familiar with Lorelai and Rory, Luke’s and I think they were slightly in awe of Richard and Emily.   Let’s face it, who wasn’t?    There is wine cooling in the fridge in ready anticipation of my own company tonight when the boys are in bed and asleep.

But not before we have our second family meeting.   I’m not looking forward to it exactly but I’m not hating the thoughts either.

During the summer, I found it necessary to sit down with the boys and iron out a few things.   I invited them to air their own grievances and speak out about anything they felt unhappy about in home life.  It went surprisingly well (I wrote about it here for the Irish Examiner) and we never had another one.   Until last Friday evening. I am discovering more and more that if you take your eye off the ball, it will fall on your head.   Hard.      Home life had unravelled into a large shouty, unhappy crazy mess and once again issues needed to be addressed.   The entire family attended the meeting, there was a chairperson appointed and minutes were taken.    We introduced the boys to a reward system like the one they are used to in school.  But instead of ticéad buí (yellow ticket) they get in school, at home they were given the opportunity to acquire up to 11 ticéad ór (golden ticket) a week for certain chores being completed and good behaviour.   The aim was to bag 80 tickets for a trip Tayto Park.  But 80 tickets is a long, hard slog so there were spot prizes for 20, 30, 40 etc. and it would be up to the boys how they spend their earnings in a democratic voting system.   They loved everything about it.   All week, Smallest Boy cleared way a space on the table requesting a family meeting for that night.  It will happen this evening; the agenda being a review of how things went during the week and another chance for everyone to give their input.    There will be a “special” hot chocolate for the boys and a long, cold glass of wine for me.

Friday nights in general are a chance for me to recharge my batteries.  It is not something I can do easily and my preferred method of rejuvenation is solitude.   Alone time.   With no-one near me, at me, touching me or talking to me.  For as long as possible.   It is only a few hours on Friday nights but enough to skim the surface off the top of my weekly overload.  It’s a simple idea but it works well for me.   And with some of my favourite things to help me do that, it can’t fail.