Playlist of My Life 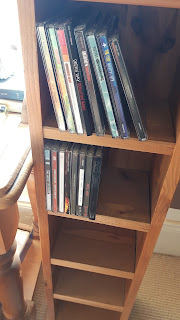 So, Nicola from Simply Homemade has come up with an absolute gem of a linky.  It’s called Playlist of my Life and it does exactly as it says on the tin: you list the songs that take you back to pivotal and significant times in your life.   I thoroughly enjoyed reading the playlists of everyone who has taken part – you can see them here – and was reminded of some great tunes.  Songs are a little bit like smells in that they can evoke such strong memories and take us right back to another time, world and place.

It’s taken me ages to put this together because as we have all discovered, there is no end to the memories and the songs just keep coming out of nowhere.

So, here’s the playlist of my life in no order whatsoever.

Radiohead -  Fake Plastic Trees (In fact the album The Bends)

Once upon a time a congregation of twentysomethings would congregate in a small, darkly lit somewhat dingy pub situated on Leinster Street, Athy and knock back pints and some of us even smoked in the pub.  All of this was done as we listened to what came out of a jukebox hung on the wall.   The Bends was one of the most popular albums and Fake Plastic Trees is guaranteed to stop me in my tracks every time and transport me back to the days where worries were no greater than did I pay my rent and have I enough money to go out at the weekend?

This one takes me back to The Mean Fiddler on Camden Street, Dublin where it was a popular floor filler.  Or maybe there was just so many of us there for Buy One Get One Free Cocktail Tuesday (or was it Wednesday? Thursday?) it seemed like the place was full.

Paul Simon - You Can Call Me Al

So many words.  So much whistling.  Impossible to sing and whistle at the same time so I just stuck to the lyrics.  I still love it. My favourite lyric is “he sees angels in the architecture, spinning in infinity, he says Amen! And Hallelujah!   Interesting backstory, it was written after Paul Simon and his wife (I believe it was Carrie Fisher) hosted a dinner party and one of the guests insisted on calling them Al and Betty.

Sheryl Crowe -  No-one Said It Would Be Easy

My sister got Sheryl Crowe’s first album Tuesday Night Music Club for her twenty first and we all loved listening to it.  All I Wanna Do was of course the hit single that sparked her long career but I fell in love with this song.   It had even more meaning for me when I became a parent for the first time.   no one said it would be easy, but no one said it’d be this hard.

New Kids on The Block -  Tonight

I had to include a guilty pleasure.   Remember these lads?  The American boys who burst onto the scene and had young wans screaming and fainting in their wake.    What were we like?  Ahem.   Their dance routines, their videos, the rough edges, the brothers and the baby, Joe.   Rumour has it they’re making a comeback.

The Cure - Friday I’m in Love

My oldest boy is currently listening to their back catalogue and I have to say I never roar at him to turn that down when I hear this track.   Because once upon a time, we were all in love on Friday.

I say Perfect is my karaoke song but this one is bursting with summer sounds and feelings.  I love it.   I love Eddi Reader’s voice on this one.

Such a robust and energetic song.   They don’t make ‘em like that anymore.

I remember being in my bedroom at 16 or 17 and the DJ introducing us all to the latest Irish band to appear on the scene.   Of course, I knew who U2 were but admit to being unimpressed by them (at the time!) and then The Four of Us released Mary.  It helped that Brendan Murphy was miles better looking than Bono and spoke in that lovely, lilting Co. Down accent.

There was nothing Ironic about Alanis.   Jagged Little Pill screamed of anger and pissed off-ed ness and I lapped every single bit of it up.   A few months ago, when I was mourning the loss of another radio schedule shake-up, I was on the search for an alternative station.  I thought I had found it when the DJ started to laud this album and laid claim to them having no less than three Jagged Little Pill albums scattered about – the car, the bedroom and the living room.  How then, I wondered, if you were such a massive fan, did you play the radio version of the song with all the eff words?  I changed radio channels.  Again!

Crowded House -  Weather with You & Better Be Home Soon.

Oh look, just put on their greatest hits and I’m on earthly heaven.  Crowded House has the power to transport me to a particular Sunday morning in spring and also to a shared house in Dublin where we had the absolute craic!

A real pop song.   Many moons ago my cousin and my now sister in law feked off to America for a year.  Because they would not be around for Christmas, this prompted the rest of us to host a Christmas night for them in October.   We did chicken and ham, put up the Christmas tree and even managed to find some crackers.   We played Christmas carols and danced the night away in a tiny flat.  The tree stayed up until the following March if I remember correctly.

I was five and listened to this on vinyl.  I kid you not.  OK, so now I know why my kids ask “was that when things were in black and white?” whenever I talk about the olden days.

I sang this song at the top of my lungs with happy vines before I realised it was about domestic abuse.

This was such an unusual, random song and I was pregnant for the first time.   I am drawn to stories told and songs sang through the eyes of children.

The Only Way Is Up – Yazz

It was this woman’s appearance that hooked me before the song.  I thought she was incredible looking.   She was so tall.  So energetic.   Her hair intrigued me.  She had fabulous teeth and skin, these huge, expressive eyes and then her voice on top of all of that, belting out such an encouraging message.

That’s it and I only scratched the surface.   Makes me wish I hung onto all of those mix tapes!