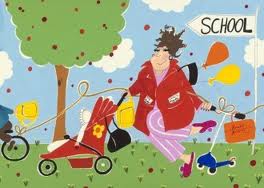 “Style comes in all shapes and sizes.  Therefore, the bigger you are, the more style you have” Miss Piggy
Holy school run Batman!  Once upon a time I thought I was busy. I did!  The cheek of me!  Excuse me a minute till I laugh myself into a coma.  And now for a little cry.  Ah, that’s better.  Much better. If you recall my weight loss of last week, where I shed a little over three pounds, I have the school run to blame/thank for this.  The school run and all that happens in between.  C’mere to me, the person who coined the phrase “the school run” till I beltcha with my shovel.  You’ve never had to do a school run, have you?  Be honest now.  I know you haven’t because if you did, you would know there is nothing even remotely quick about it.  So where, I would like to know, does “run” come into it? Pull up a chair there now and I’ll tell you what my school run involves.  In order to have them in school on time, which is 8.45am; it means I have to load them into the car at 8.15am.  It takes 15 minutes see coz one of them usually goes missing and I have to find him.  Then I have to locate the bloody dog and persuade her to go back into the damn house.  This is the same creature that refuses to leave the house when the boys are having breakfast.  By the time I do this, turn the key in the front door and get back to the car, the three year old is usually walking around the back of the car having opened his straps. So I have to buckle him up again amid loud threats of what the guards won’t do to me if they catch him like that.  It’s 8.30 now and we’re finally on our way.  Once we leave at precisely 8.30 of a morning, we are fine.  It is a straight run to the school.  Pretty much.  But then I have to get out again and back home.  Where I repeat the above steps at 11.30am to collect the boy who has just started school.  His day finishes at twelve noon.  Back home at about 12.20pm before I do it a third time for a 2.30pm pick up.  Oh and on Thursdays and Fridays there is a Montessori run as well.   I also have to cook them all something to eat in the middle of this madness.  See?  Nothing quick about it.  For me and the other hundreds of parents in the same boat each day.  And poor Screecher Creature No. 4 doesn’t know what’s hit him.  As soon as he gets his head down for a snooze, he’s whipped up out of the cot, flung into his car seat and off on another drive.  The driver’s seat barely gets a chance to go cold since my arse last sat on it before it’s time to warm it up again.  The stress of it!!   Ten years ago I was supposed to be at the church at 2pm to get married.  It was 1.30pm and there was still no sign of my dress.   I thought that was stressful.  It was the last day of the summer holidays and the school books which had been ordered six weeks ago were still in transit.  Somewhere.  Ok, so the dress arrived as did the school books but the school runs are going to continue for a long time.  This week, or was it last week, I loaded up the toothbrushes and lined up the lads.  I popped one into my mouth to turn on the tap and just in the nick of time discovered that I had put Veet on the damn things and not strawberry flavoured toothpaste.  At least my tongue will be hair free for a week or so.  Yes, it was disgusting.  The boys thought it was hilarious even though they had no idea what they were laughing at.  Maybe it was seeing their mother spit all over the floor when she’s usually roaring at them never to do the same thing.  It’s been mental.  It really has.  Batch bread (with jam and a smidgen of Nutella) is responsible for keeping me alive this week.  That and copious amounts of coffee.  The rest of them have been living on pancakes, drop scones and waffles courtesy of my new waffle maker from a well-known German supermarket. Not the healthiest of vittles.  I haven’t neglected my running either.  I managed to get out most evenings.  I did take Wednesday night off.  Wednesday may be the “over the hump” part of the week but I couldn’t even get over the hump.  I had to take to my bed early.  Due to the workload, I’ve been waking up at odd times during the night, wondering which one of them I’ve left at the school gate, did I make the lunches to save time, have I turned off the water, what was that noise, have I something clean to wear in the morning? And guilt.  Guilt that they are not involved in any after school activities.  Something that has been playing on my mind a lot lately.  They are members of a gym club on Saturdays but that’s all.  So just to ramp up the mayhem a little bit and make sure the car seat doesn’t get too cold over the weekends, I have enrolled them in the local swimming club.  My little frogs will be joining The Frogs this Saturday morning at 10.30am and then off to gym club at 2pm.  Ah well, I live in hope that all the activity over the weekend might keep them in the bed until 8am on Sunday morning.