Back to School Bloopers 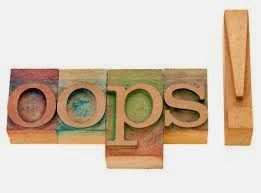 SO some of the schools have already gone back.  Facebook is awash with first year secondary students starting the next leg of their education.

In our house there are 6 sleeps left before the school gates crank open and this year I will have three children attending school.  Three down and one to go.  Not that I’m counting or anything.

Now, having been there before you would think I’d be familiar with all the do’s and don’ts.

I keep screwing up and making a few new ones for good measure.

First major screw up was a couple of weeks ago.  I responded to yet another bathroom summons by asking, “Who do you think is going to wipe your tush for you in school?  Múinteoir certainly won’t.” 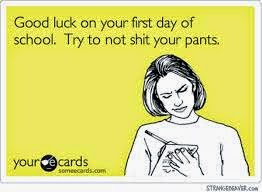 I never saw panic or upset like it before.  “But who will then?  Now I can’t go!  How can I go to the bathroom if my teacher won’t help me?”

He refuses to be shown how to do it or to even try it himself.

This boy is completely without guile and it wouldn’t cost him a thought to sit there and roar out like he does at home for someone to “wipe my bum.”

I felt mean for bringing up the fact that wiping arses is not part of a teacher’s job but I would be doing him an untold social injustice if he went thinking it was.  In the event of no-one coming to his aid he wouldn’t think twice about leaving the vicinity of the bathroom with everything down around his ankles and waddling up to Muinteoir’s desk.

We are still working on it and when he is upset about something, he will combine his concerns over this with a new fear of being made leave home before he is ready and Jesus Christ, who thought it was a good idea to let five year olds think anyway?

Then I made another blooper.

You know I have four boys, right?

Bear in mind I have been buying the same type of school trouser in the same shop at the same time of year four years in a row now. 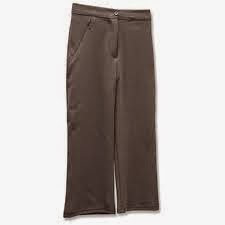 Three weeks ago I purchased a girls trousers for Oldest Boy.  I suppose these things happen when there are 275 identical trousers ranging in ages from 4 yrs to 18 yrs all mixed up together and 3 of the boys are crawling underneath the clothes rails with the other one sampling the cosmetics.

I was this close to going ahead and getting the hem turned up anyway rather than face the torture of another trip back to the shop with the four of them in tow.  In the end it was the image of Oldest Boy looking like a 70’s throwback in flares that swung it for me.

And the award for biggest blooper goes to the boys themselves.

They thought it would be mighty helpful or just damn funny to tell Lovely Liam he would be getting an injection.  In his arm. But it doesn’t hurt.

Too late.  Way too late.  You had him at injection.  He couldn’t hear anything else after “injection” and “arm” due to all that blood rushing through his ears.

It also didn’t help matters that an episode of horrible Horrid Henry was doing the rounds.  The one where he was getting his own injection at school. 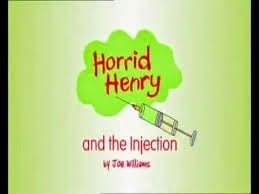 Complete with totally exaggerated syringe and twelve inch bore.  Plus the horrible Horrid Henry himself announcing in his completely annoying voice how painful it is.

So what’s ahead of me?

Probably just a scratchy jumper.  One he will most likely refuse to wear.  Complaints about tight shoes.  A heavy school bag.

Oh and he also thinks he will be sharing a classroom with his older two brothers.

You think Back to School is hard on the kids?  It knocks ten bells out of the mothers. 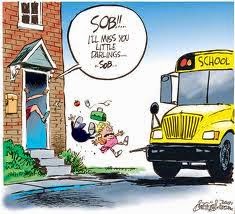