But What Will I Write About? 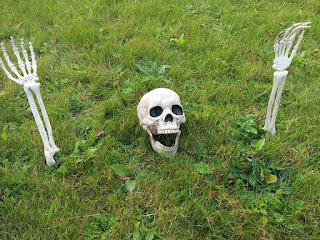 You’d better write something, I told myself.  It’s been weeks and you’ll forget how to.
But what could I write about?  Once upon a time I was able to pluck something out of thin air and make a kind of blog post out of it.  Sometimes it worked, sometimes it kind of worked.

It’s been a quiet few months in a very busy way.  So I could write about that, I suppose.

You know, fill the page with crap about school runs, dinners, homework (does anyone else let their kids do theirs in the back of the car on the way home from school?) how I’ve been watching my pennies by shopping in Lidl and thinking about buying tins of sweets in preparation for Christmas, decorating the house for Halloween, carving pumpkins, making lemon drizzle cake and granola for breakfast (yum!) and how the  kids (and me!) are dying for the mid-term which is tomorrow.

Which means dress up in school.  I could mention how two of the boys want to wear a simple black t-shirt with a glow in the dark Halloween picture on it and one boy wants to be a devil.  The smallest wants to be spider man. No, wait. Batman!  No, wait.  SpongeBob!  No, wait. Spiderman!  No, wait! Nothing at all.  He doesn’t want to dress up.  But wait! Definitely, definitely Spiderman.  With face paint!

Maybe I’ll do a few lines about how I am still delighted with my three hours each morning and how I spend way too much time in my hallway going wheee after the school run.  Except I don’t.  I come straight home, go wheee and then take the dog for a run.   4 sometimes 5 mornings a week and loving every single step.  I could casually mention that I have also given up chocolate and crisps and cakes and biscuits and obvious sugary junk foods but that sounds a bit self-righteous and boring so I won’t.  Guess what I found out?  If you don’t keep your junk food in the press that you open 47 times a day, you don’t eat the junk food!  True story!

The car door wouldn’t close at the school gate one day.  Do people want to hear about that?  We have slidey doors and the back one got all huffy and refused to shut.  Couldn’t be moved.    Eventually a nice daddy heaved it shut for me and we went on our way.  I have contemplated leaving it the way it is but I reckon having four boys swinging out of it up to 15 times a day could make it a more expensive repair in the long run.

Would you like to hear about how the kids continue to murder each other?  I think we might have a resident robin in the garden. I’ve seen him a few times.  Would updated Christmas letters again be of interest even though I have told them to stop changing things around?   The dog needs her winter boosters and I’m still trying to take her in to get them. We’ve returned to the library and oldest boy is literally inhaling books.  The others are enjoying the DS games, audio books and DVD sections.

See? Nothing to write about.  I’ll go off and dry my hair instead.  Maybe bring a cup of coffee with me.    Or a beer.  Maybe a beer.