Niamh Boyce on The Herbalist 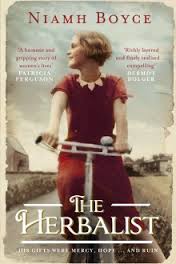 When I was contacted by Niamh Boyce and asked would I interview her for a blog tour, to promote the launch of her first book The Herbalist, I jumped at the chance.

Niamh, the Hennessy XO Writer of the Year Award for her poem Kitty hails from Athy, Co. Kildare and it was in the town’s library that Niamh hosted her launch for The Herbalist.  It was crammed to capacity and her book sold out in minutes.

When I finally got to the top of the queue to have my own copy signed, Niamh was as gracious and articulate in the flesh as she is on paper.  It was a pleasure to meet her properly and a privilege to have been present.

The Herbalist is an amazing piece of literature set in a small market town in Ireland during the 1930’s.  One day an exotic stranger arrives and causes quite a stir, least of all for one of the main characters, Emily.  The Herbalist is told through the eyes of four female characters, all of them seeing him differently. It is a perceptive narration of the effect this newcomer has on them all.  Niamh captures an Ireland of old yet still a very present day world with her recount of social expectation, censorship and tragedy.

There was such insight, a real depth of emotion.  My heart broke.  I raged.  I was afraid in parts, particularly towards the end.  And I was just the reader.  I asked Niamh how close to her characters was she?  Did she have a favourite and did she feel protective towards any of them?

Thanks Gwen, it was lovely to meet you at the launch! And so happy to hear you had such a strong response to the book! With regards to the characters- I was closer to some than others. Some characters allow you into their thoughts and some maintain a distance. It all depends on their personality. I felt closest to Emily and Carmel whereas Sarah and Rose were less inclined to spill the beans.

Working with characters is like listening to real people, some take longer than others to tell you the truth, some will never tell. But I think it’s important to get as close as you can. As a writer you may begin a story not even knowing the character’s name, but by the end you should know their dreams, fears, secrets and hopes. You should know what they keep under their bed!

As I wrote the book my favourite character was Emily but I’ve become very fond of Aggie lately. And though I cared for the characters, I didn’t feel overly protective.  I think if I did it would have affected my writing in a negative way. There was one character I wanted to save - but I knew in my heart what her fate was, and I had to stay true to it to stay true to the book.

I really enjoyed your interviews during the launch and I heard in one of them you found the real life herbalists notebook during your research.  What did that feel like, knowing you had a tangible part of him?

It didn’t feel very nice to be honest Gwen. It made me wonder whether I should write the book or not. I think the experience of reading that notebook darkened the story for me, earthed it almost. Which in retrospect was a good thing.

I understand The Herbalist lay dormant in your head before finally being fleshed out and committed to paper.  Did you feel a sense of relief when he was born?

Before the novel was written, the herbalist had appeared in several of my short stories, but interestingly it was always through someone else’s eyes, a child or a woman.  So though the character of the herbalist is central, pivotal to the story, it was the women’s voices I needed to commit to paper, it was their story. And the sense of relief, (which I did feel!) was connected to the release of their narratives.


Thank you, Niamh for the opportunity to ask you my questions.  Congratulations on a fabulous book and continued success to you in the future.


Thanks for such interesting questions Gwen, it was lovely to chat to you and hopefully we’ll meet again.

You can follow Niamh on her blog here for more details on her blog tour and future book news.