The Mystery of the Disappearing Cutlery 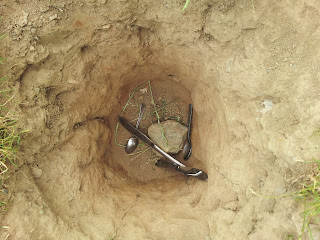 I’ve heard of the tooth fairy.  Who hasn’t?  I am also aware of the sarcastic insistence regarding the washing up fairy’s existence.

The sock fairy, there’s another one.

But I’ve never heard of the cutlery fairy.

But he or she has been to my house.

Seemed particular too.  They took only knives and tea spoons.

It was puzzling.  Kind of.  I suspected who the cutlery fairy/fairies were all along but only when I was looking out the window one night, was it confirmed.

Down below me, on the grass outside, silver, glinting object caught my eye.  And another one.  And still another although the third one wasn’t shining up at me.

Three forlorn tea spoons lay abandoned in the grass.  Together.  Alone.  In the almost dark.

Because the boys were doing this earlier on that day. 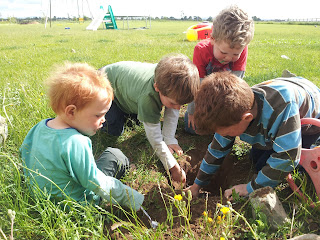 But where were the knives?

It was a royal pain in the arse having to wash spoons and knives each time I needed them rather than just going to the drawer each time.

So I lifted the cutlery tray out and placed it on the counter top beside the sink. Another royal pain in the arse as it’s in the way there.

The next day I heard the drawer being yanked open and the noise of a little hand scrabbling inside it, searching for a digging tool.

I frog marched him outside and demanded to know where my knives were.

No, of course I didn’t.  When you own dimples you get away with murder but I did mention the mystery of the disappearing cutlery to him.  In a roundabout way.

He caught my hand and brought me outside.  Straight to the basketball stand.  Which is mounted on a base. One you have to fill with water to weigh it down.  To prevent it from falling over.

There are two little holes in the base.  In through which you pour your water.

I tell ya, it’s a good thing the boy has dimples.

There, flashing up at me, like a fish in a river, lay my knives.

About three of them.  All crossed over to keep each other company.

I’m thinking I might just go out and buy me some plastic cutlery.