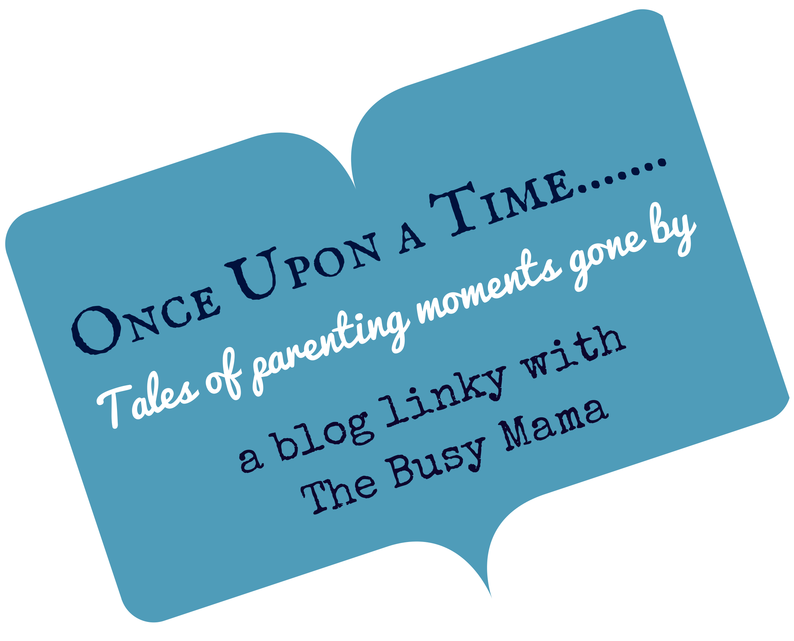 This month I am taking part in another blog Linky hosted by The Busy Mamas called Once upon a time………….tales of parenting moments gone by.

I have so many.  So many moments that will never happen again.  And there are some in there I thought would be gone by now. Long gone but in true parenting fashion, make plans and the little blighters laugh at you.

Our boys are older now but two years ago, as a public health nurse kindly reminded me recently, two years ago it was absolutely crazy.

It still is kind of busy, messy, loud, tiring and loving but in different ways.

The torture that was teething has passed. They’ve all got teeth now, some have even got adult ones, but it has just skooched up a bit to make room for dentists.

The easiness that was breastfeeding is but a thing of the past.  Smallest Boy finished up two years ago and moved onto solids with much gusto. Now I have to buy food from all of the food groups.

Once upon a babymoon I watched over the sleeping, milk drunk baby and counted the minutes until he woke so I could feed him again.  These days I look at the smallest two and marvel at how quickly they can accumulate dirt after their bath and in the half hour before bedtime.

Walking has morphed into the latest challenge that are bicycles.  Which means plenty of
scraped knees and elbows.

I have accepted the noise levels are here to stay and these days tiredness can be sorted out with a sneaky afternoon nap at the weekends if it is needed.

However, there are a couple of things I thought I would have been free of at this moment in time; nappies and cots.  Smallest Boy turned 3 in April and is holding onto both of these babyhood remnants with tightly closed fists.  One of them, the nappies, literally.

He is adamant he will not be wearing Big Boy Pants any time soon.  Suggestions of a Big Boy Bed are met with firm “no’s” and “I don’t want to’” along with “I love my cot.”  And he does love his cot.  So much so he still hasn’t climbed out of it so I suppose you could say I am in no rush to push him onto a mattress and under a duvet.

Up until very recently he liked me to feed him.  He is perfectly capable of doing this himself but we have great chats when we sit side by side and I spoon his Weetabix into him of a morning.  I think he enjoys this too.

This year another boy will be starting school and if I followed the previous trend, Smallest Boy would have a place in Montessori. Again he has taken charge and told me he doesn’t want to go - he wants to stay with me.

And do you know what? I am fine with that decision. It is one made by a three year old but until such times as he sees ready and willing to go, I am following his lead.

It has crossed my mind more than once the reason I am in no hurry to potty train him, get him out of his cot or gently encourage him into Montessori is because I am all too aware he is the baby of the house.

He even answers to “baba” for heaven sake.

“Enjoy them while they’re small, they grow up so fast” and “these are the best days of your life” used to incense me back in the early days.

I was demented through lack of sleep, would have taken the head off of you for looking at me sideways and at times I was taking each day literally hour by hour.  I really did not appreciate hearing these little clichés.

Now the red fog has lifted and I am (partially) sane again, I see the wisdom and truth in those words.

They do grow up so fast.  These are the best days of my life.

But I also think it’s great that things move onwards and upwards.  I enjoy seeing their independence.  It also means a little more freedom for me.  Remembering the separation anxiety of old, I feel relief when they run off to play with their friends and turn to wave confidently at me.

When one of them insists he doesn’t want to wear shorts and t-shirts when the weather is hot and opts instead for his jeans, long sleeves plus shoes and socks, I don’t argue.  I like that he knows his own mind.  It is one less decision for me to make.

But when the cot finally does get dismantled, the last pack of nappies eventually bought and that damn double buggy finding its forever home, I know it probably will be bittersweet.