A Picture Speaks a Thousand Words 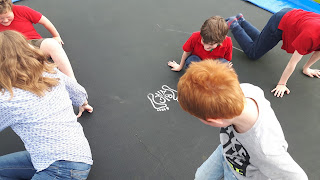 Or in my case one thousand pictures speaks just one word: No!
Swiftly followed by, “Don’t want to” and possibly – very definitely maybe – “Would she ever just fek off with herself.”

Trying to capture a moment on camera with four kids is not easy.  I dread it every time.  Fortunately for us, we are rarely in a situation formal enough to warrant such a traumatic event.

We generally have a much better success rate when we employ a stealth tactic; creeping up on them when they are not paying attention, press the shutter button (is there a shutter button on a phone camera?  Probably not) and shoot for your life.

They’re not even aware you are capturing their spirit thus endangering their lives (that’s what they make you feel like sometimes) and chances are there will be one picture in there, somewhere, with three out of four of them looking in the one direction. 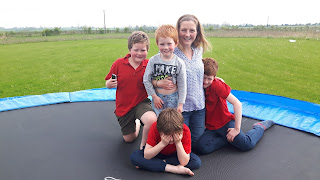 I didn’t say anything about looking at the camera, however.  Just, you know, in one direction.   A random one. Any one will do.

We consider ourselves having done very well if one of them is not scowling or covering his face with his hands.   It’s only wonderful if none of them are doing the bunny ears stunt.

So why put ourselves through this torture?   Why indeed.   I needed to take some photos of them to accompany an article I am writing.    In fairness, we were offered a photographer.  Someone who would come out to the house to take care of the gory details.  (In hindsight that sounds great.) 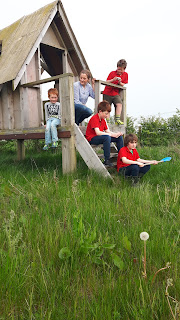 But I’m allergic to professional people visiting my house and even more allergic to the clean-up that would have to be done beforehand.

(But we’d have a lovely photograph of the boys.  We don’t have many.)

Too late.  I politely turned down the offer.

Instead I issued promises.  I told the boys that if they co-operated and smiled their heads off at the correct times, resisted the bunny ears temptation they would be duly rewarded with a hot chocolate.

The fact they get one most evenings wasn’t mentioned.

I swore blind this most dastardly of photo events would only take ten minutes, fifteen tops and with one of their parents taking the pictures, it would mean they wouldn’t even have to change their clothes. 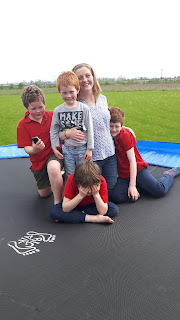 Threats came next.    They were told that if they didn’t comply there would be no hot chocolates (hah!) and a photographer would come out to the house the next day and it would take all afternoon.

They would be smiling for hours on end.   They’d have to shower.  Change their clothes.  I might even insist they get a haircut.

The screams of terror.

It was still a disaster.

And they got their hot chocolates.   Looking through the photos later that evening there were one or two with bunny ears.

It was the only way I could release some of the tension and frustration I was feeling.  How hard is it to smile anyway?

If I could post out-takes/bloopers I would.  Or maybe not.  Here instead are a few quotes.

None of them were really suitable so it looks like I’ll have to go back to the drawing board.   right now, photo shopping sounds great!