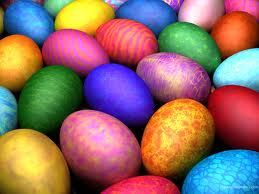 The Easter Holidays are upon us.  Both Screecher Creature No.’s 1 and 2 are officially on leave of absence from their respective schools.  I remember a day not too long ago, when we received a cruel and scary notice from the ESB, informing us that our electricity was going to be cut off between the hours of 10am and 6pm on Monday for “essential maintenance.” I went into a blind panic at the thought of entertaining kids without the unpaid babysitter. (The telly, folks.  The Telly!)  And without a fek load of coffee to keep me going and my spirits up I might add as naturally without power there is no caffeine.  Jesus wept; I didn’t know I was born.  I have got two whole weeks stretching ahead of me.  Yesterday, Palm Sunday, (anyone remember what that’s all about?) Mister Husband needed to work.  So it was just me and the Awesome Foursome.  We all went to nanas for dinner (nom nom) but after that it was just me and the boys. I looked on it as a practice run for the next 2 weeks which in turn will be a practice run for the summer holidays in 10 weeks’ time.  (eeekkkk!)  What on earth am I going to do with them?  The cinema won’t work because what do I do with The Snot Bucket?  Leave him in the car?  (Screecher Creature No. 4, newly Creeper Crawler, is now affectionately known as The Snot Bucket due to a rotten cold.) The swimming pool is very tempting but managing four kids ages 6 and under, in water and by myself, is slightly terrifying.  There is of course, the park to go to.  But I hate parks.  You have no idea how much! I wish someone would get their finger out and come up with a little snack/coffee/refreshment wagon type thing for us parents at the parks.  “Mammy, look at me!”  No!  Fek off.  I don’t want to.  I want to talk to this nice adult person/read my magazine/pick my fingernails.  Get back on that slide.  I said getbackonthatslide!  “Mammy, I need to do wees/a poo.”  Why didn’t you go before we left the house?  Jesus, go in the hedge over there.  Go on!  You’re a boy for chrissakes use it to your advantage.  “Mammy, there’s a wasp!”  Guess what?  There’s probably more than one.  No, the park sucks.  The library maybe?  We’d only be banned and the Screecher Creatures wouldn’t get it.  Borrowing books would be an alien concept to them; books are for buying not for borrowing.  Yes, the one thing I do nurture and encourage is their love for books. I am seriously hoping that they will discover, as did I, the magical, fascinating world of escapism that exists between the covers of a book and spend their summers and weekends and all holidays alike curled up in a ball somewhere, reading.  Out of my way.  I’ll just have to come up with something else.  Let’s see.  Ok, Mother Hubbard’s cupboard is bare so I will have to get in some essentials.   That means the supermarket.  Believe it or not, the Screecher Creatures are not bad in the supermarket so this is a strong possibility.  More of a necessity really as there truly is nothing in the house, so that’s Monday morning covered at least.  My Tuesday morning breast feeding meet up has been a staple in my life since last June so that is not going to change.  Screecher Creature No. 1 is hugely excited about going this week as another boy his own age will be there.  This also handily doubles up as a “if you’re not good, you won’t go to group” threat, so bonus!  Tuesday morning done and dusted.    Screecher Creature No. 1 came out of school on Friday with a little flower pot in his hand, proudly protecting three of the weakest, straggliest looking green shoots I have ever seen.  I think it’s parsley, I’m not sure.  Or rather, it was parsley.  Someone (Screecher Creature No. 3) snapped them all in half the first chance he got.  I managed to pick up a packet of parsley seeds, cleverly stuck to paper, all the better to make sowing them easier.  A job for Wednesday methinks.  Albeit 10 minutes or less but I am also tinkering with the idea of getting in one of those disposable bbq’s and we can play cowboys and Indians in the garden, and then cook our tea on the bbq.    Thursday is Nana Day so that’s covered.  We have also yet to visit my sister’s new house. We could do that too.  Hey, I’m not doing too badly here.  At this rate I should cut back and save a few for next week.  This of course is a long weekend so we will probably definitely get to the pool.  Maybe even take The Snot Bucket for his first dip, horrible summer cold permitting.  I reckon all I’ve got to say now is, bring it on.  But, please. Be kind.  Be kind.