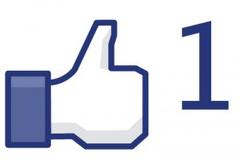 I’ve never won anything in my life.  Oh wait, I did.  I won an Easter hamper full of chocolate years ago for a poem I wrote.  And some pedicure yoke from a magazine during the summer.  That’s still under the stairs.   And a Marian Keyes cook book. And then nothing.  For the longest time.  And then……….

I won a dress!  I won a lovely, lovely dress purely by chance. 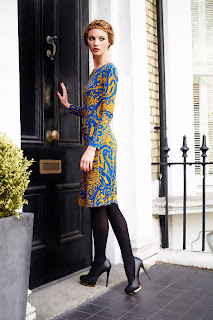 Unfortunately I am not that tall or lithe.  I do, however, share her hair colour.

In a certain light.

All I had to do was Like and Share a page on Facebook.  So I liked and I shared with a few people and then forgot about it.  As you do.  Until I logged on one night and there it was.

My name was flashing at me on the screen and the word winner was in front of it.

I didn’t pay any attention at first.  I am well used to seeing “Winner” on the lotto machine whenever I check my ticket except “winner” is always preceded by “not a.”   I want to spit at the machine and say, “Boo to you!  My kids think I am a winner.  So there!”

So I almost missed it that night.

And then I saw the picture of the lovely, lovely dress and I remembered.  And it clicked with me.  I had won something.  I had won a dress.

Some of the comments afterwards.

The next day when I logged onto Facebook, I was bombarded with page shares for horse blankets and jewellery.  Neither of which I am interested in but people are kilt sharing them with me hoping that some of my recent good luck will rub off on them.

I hope it will, I really do.

I hadn’t even received my dress and I went straight out and bought the shoes to go with it. 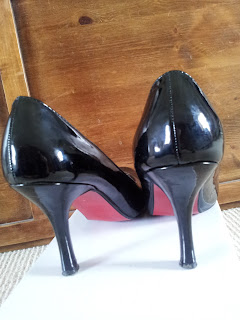 Keep in mind that I have not worn high heels for about 7 years, so this is a big step (geddit?) for me.

I have several pairs of heels in my possession but none of them fit me properly anymore.  And the even curiouser thing is the new heels I treated myself to, fit perfectly well and comfortably and they are the same size 5 as the stubborn ones at home.  The ones that are well worn and down at heel but still refuse to fit me.

I want some of the clothes manufactures out there to come up with an in between size.  You know, like a size 11 or a size 13 for when you’re having a bloated day or are when the 12 is too tight but the 14 is just too damn big.

Come one, make us some middle sizes!  Same with shoes.  I believe there are some people out there with one foot a half size larger than the other.

P.S.  I haven’t actually worn the dress yet.  When I entered the competition, I promised them I would blog the crap out of it.  I said I would take pictures of me wearing it doing the hoovering, the washing up and even at the clothes line.

I drew the line at wearing it to bed.

But I have worn the heels.  Several times.  They are lovely.  Funnily enough, I wore them doing the hoovering and the washing up.  But not at the clothes line.  Does the hot press count?  I had a few little jobs to do that night before I took them on their first outing.

Technically speaking, I was breaking them in.

Ok, here is a picture of me sitting down in the dress.  Happy now? 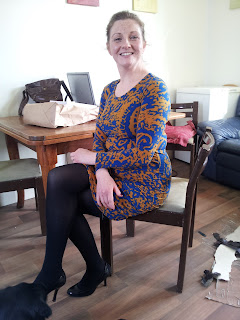