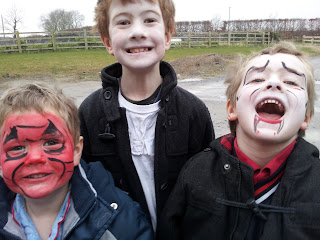 This year World Book Day fell on Thursday 7th March.  If it falls on the same date every year, I apologise.  I was like Rapunzel’s mother in “Tangled” on Thursday morning and I said, “It can’t be.  I distinctly remember World Book Day was last year.”

But wait.  That wasn’t cutting it for Oldest Boy.  “They’re Halloween costumes not book character costumes!”

Me:  Just put it on willya?  A zombie can be from any book.  I want to get to Lidl for the running clothes that are on special today!!

Shy Boy had decided to go as Spiderman.  Did I say thank Golly Miss Molly for Halloween costumes already?

Oldest Boy was proving to be a problem.  What the blazes does Gary from Diary of a Wimpy Kid look like, anyway?

Like a normal boy.  Apparently.   A normal boy wearing trousers, a white long sleeved top and carrying a school bag.

Well, why didn’t you say so in the first place?

The white top was kind of on the grey side and it had a large logo but he turned it inside out and cut the label off it.

We just might make the supermarket for 8am after all.  Before all the specials are snapped up.

Wait, Shy Boy was crumbling before my eyes.  He had decided he didn’t want to dress up but I had to play a guessing game and fire multiple choice questions at him before I could get to the bottom of his upset.  All the while keeping a close eye on the time.  Twenty minutes.  Not too bad.

Oh hell!  It was also National Pyjama Day in Lovely Liam’s school which meant I had to pack a bag with his regular clothes in case he needed to change.

“Mammy, you have to paint my face white, to be like Gary.”

“You have to pain my face white, to be like Gary.”

How do you explain to a 7 year old that Gary just has a white face and he doesn’t need to be face painted white?

In the end I took the easy way out and grabbed the box of face paints from the top of the fridge.

Oldest Boy got his face painted white.  It took about 10 seconds.  Shy Boy came forward and decided he would like to dress up after all and go as Dracula.  In a tracksuit.
5 minutes.  Maybe less.

Then Lovely Liam wanted to be Spiderman and Smallest Boy had to have his nose painted black and a few whiskers applied. 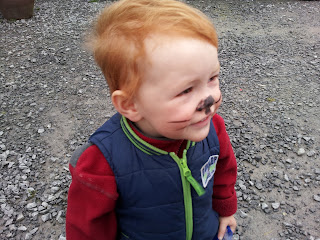 I didn’t have time to apply my own face paint which consists of a quick smear of BB cream.  I don’t even need a mirror.

It was 8am.  Into the car!  Quick!  Come on!  All the running clothes will be snapped up!

There were three missed calls and a couple of messages on my phone.  They’d have to wait till later.

Reached the supermarket at 8.10am. I trolley dashed to the specials section and fought my way through the crowd.  One running top left.  One!  In the wrong size.

Disgusted, I grabbed some milk, nice bread, a bar of chocolate and crackers before the boys started to impersonate Kevin Bacon in Footloose on the shiny floors.  Their favourite game in the supermarket.

Another trolley dash to the till where I discovered I had left my wallet at home.

Next year, it’ll be different.  Next year I am going to dress up.  Next year I will be the zombie at the school gate.  Wearing the running specials from Lidl.