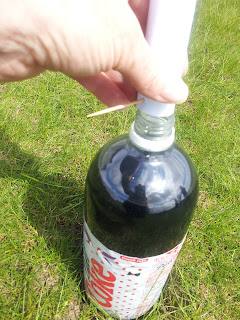 Feeling utterly inspired, and I have to admit, a little curious, after a lovely comment on last night’s blog post, I decided to have another go at it.

Yes, you definitely do need the Mentos sweets and Diet cola.  We used almost three packs of the sweets.

The funnel is the trick.  Roll up a piece of A4 paper small enough to house a row of the sweets.  You don’t want them piling on top of each other as this means only five or six will drop into your bottle.  You will be left with a roll of paper packed full of minty sweets with nowhere to go. 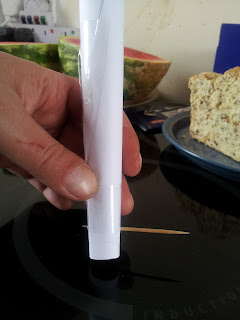 Stick a cocktail stick through the bottom of your funnel.  It is a good idea to hold it over a bowl, remove the stick and give it a test run before trying the real thing.

Now, a small word of warning.  This experiment is over very, very quickly.  In five seconds or less.  I missed the whole thing and certainly did not have enough time to capture it on camera.

But Mister Husband was on the decking with his phone and has to be credited with the resulting footage.

Give it a go.  It is very short lived but very impressive.