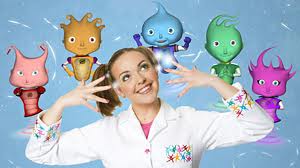 At present, I am travelling to Dublin every 5 weeks or so to partake in a (lovely lovely lovely lovely) course.  On these occasions I stop off in Eason’s at Heuston Station to pick up some and treat the lads to a completely useless, totally expensive comic book.  Each.

The array is staggering.  And the price even more so.  Last purchase cost me €13 euro for the same comics.

But when we were kids, our mother never ever came home from a trip to Dublin without bringing us back something.  I can still remember the Brambly Hedge writing set that was given to me from one such trip.

Anyone remember the Story Teller cassette tapes?  We used to get those too.  Childhood memories are made of these. 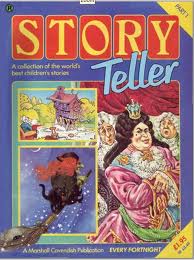 The boy’s comic books invariably contain a page of a fascinating cut-along-the-dotted-line thing to make.  It takes about forty minutes to assemble and precisely five minutes for the child to lose interest after it is painstakingly made.

But Oldest Boy’s comic book usually contains a scientific experiment or two which are simple enough to do with him.  And like every good magazine, the list of things he needs for his experiment are generally in the house.

This day though, one of The Fizzy Fountain experiment ingredients had to be bought 'specially because fizzy drinks are not allowed in our house.

I went along to the German supermarket and bought a litre bottle of fizzy black liquid for 55c.

The other ingredients he needed were a scissors (check) a cardboard tube made into a funnel (check) and some chewy minty sweets with a hard shell (check)  *Had to buy those too actually.* 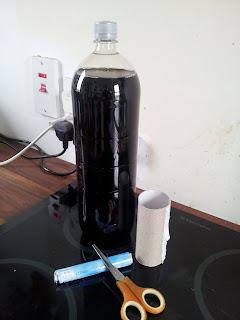 The experiment was easy.  Very easy.  And too quick.

We stood the opened bottle of pop in a hole in the ground.  This is not an experiment for indoors.  Messy messy business.

Put the cardboard funnel into the neck of the bottle and have a fistful of sweets handy. 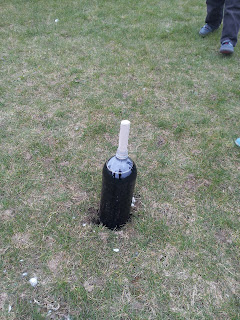 Pour into the funnel, remove funnel and stand back.

Actually the *stand back* didn’t deserve the italics.  Yes, we got a fountain. A murky brown one but it was small. 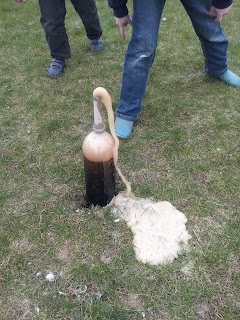 The lads had better fun running in and snatching gobby mouthfuls of the banned that’ll-rot-every-tooth-in-your-head drink.

Maybe I should have used the full fat made of real sugar and other crap ingredients fizzy drink and not the cheapo diet version? Maybe I should have gone ahead and just bought a very very expensive bottle of branded Cola instead.

But definitely, by all accounts, I should not have scrimped on the minty sweets.  If you are of a mind to try this fizzy experiment over the school break, get the Mentos mints!!!   Something to do with the surface area and the holes.

Mister Husband lost me after nucleation site.
The lads had fun and that’s all that matters.