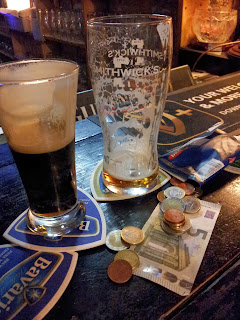 I posted last year about mine and Mister Husband’s annual solo trip to do some Christmas shopping and how our conversation was stilted, to say the least, initially.

This was due to the kid’s absence.  It seems our “conversations” in the car as a family are primarily directed towards the passengers in the back, asking ordering them to stop fighting, to take the noise levels down a notch and answering endless, random questions.  (Can chickens swim?  What makes the wind? Does pain hurt?)

A few people mentioned That Silence to me since.  It’s reassuring to know we are not the only ones who are so used to the backing soundtrack of our kids we have all but forgotten how to talk to each other when we are alone.

This cropped up again.  Last night in fact.

Mister Husband and I usually get out over the Christmas break for a meal and a few drinks.
This yearly event took place last night.

I’ll call it date night.  Because it sort of was.   And then I wondered would it be the car on the way to do our Christmas shopping all over again; would we sit there in silence talking about the weather and the kids in order to fill the silences.

So I thought about making a list of some Date Night Rules.  Not because I am a party-pooper but because I love lists.

*And maybe I am a little bit of a party pooper but I like to know where I stand.  Specially when I Only Get Out Once Or Twice A Year. *

I wasn’t taking any chances.

Stuff not to talk about
·


Stuff we can talk about.

*I’m sure I’ll think of something.

*It was a great date night.  We skipped the meal.  That would be cutting in on drinking time and went straight to the pub.  The conversation did start off slowly enough but I was assured by those in the know (Mister Husband) this is common enough.  It’s called “warming up.”

And after that there was no stopping us.  We broke all of the above rules, except the politics one.  And I stomped, really hard on the woodworking bylaw as soon as it tried to break free.

We solved a few of the world’s problems, as you do when alcohol has been taken.  Guinness, as you’re asking.    And I managed to redesign most of our house.

Of course skipping dinner caught up with us so we felt compelled to collect a sneaky take-out on the way home.