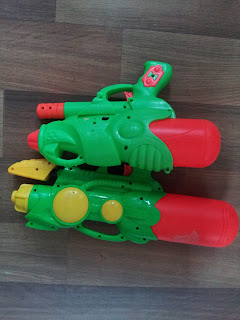 Well, it was water pistol season but right now someone out there is having a joke at our expense.

This time last week I was out running with Friday Night 80’s for great company.  Tonight it is batten down the hatches and listen to the rain belting off the window.

In a two fingers gesture to the crap weather I bought this earlier on today. 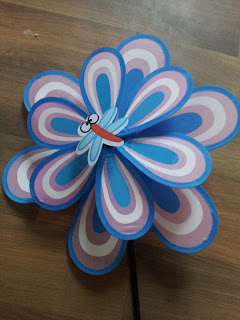 Isn’t it gorgeous?   I was walking past the discount store and it was stuck in a stack of terracotta flower pots and blowing merrily in the wind.

I had Smallest Boy with me and I unashamedly used him as my excuse for purchasing one.

It looks dumb now propped up on the kitchen counter as the rain lashes down outside.  But it’s still gorgeous.  I would love a garden full of these.

But anyway, last weekend, when we did have glorious June weather, I went and bought the boys water pistols.

When there was glorious sunshine, I refused to procure a paddling pool to avoid the hell that inevitably, for me, accompanies it.  I even turned down two paddling pool invitations at my sister in laws.

I am aware it was not a treat for me (although the coffee, biscuits and chat would have been lovely) but four hot, squabbly kids and paddling pools, even someone else’s paddling pool, does not make a pretty combination.

So I declined and made my apologies.
Equally with water balloons.  They’d love them but I could spend half an hour to forty minutes filling the things and two events would follow.  Very quickly.

The 78 water balloons would get burst in record time, possibly under five minutes, and one of the boys, I know which one but I’m not saying, would take great umbrage to the inevitability of getting wet.  Accidental or not, he’d lose his rag and there would be seven different types of hell to pay.

All of them mine.

I thought water pistols were the way to go.

Into the discount store we went and in order to avoid regular requests for refills, I encouraged them to select the biggest guns there.

Twenty one euros lighter later, I soothed the pain by reminding myself of the peace to follow.

We got home and I filled the pump action water toys.

Pump action.  Should have seen it really.  It was bound to happen.

Within half an hour Oldest Boy managed to snap the plastic pump handle off his weapon.

Of course it was all my fault.

Next time I will just let them use their juice bottles.

The water pistols are currently resting peacefully in amongst all the saucepans.  Waiting for another day in the sunshine.