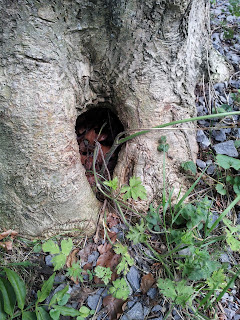 The boys are having a ball this July early August.

They are back from a wonderful week by the sea in Rosslare and just in time too as overseas cousins have arrived.

We don’t get to see Mister Husband’s first cousin and her two daughters very much, twice maybe three times a year, but in true cousin style, they all take up from where they left off last time.

The girls are the same ages, almost exactly, as our two eldest and they get along famously.

There was great excitement when talks of camping started.  Ok, it was going to be in granddad’s garden and Mister Husband was staying over with the boys to help out with the other 7 cousins, but there was a tent and sleeping bags.

That’s camping that is. 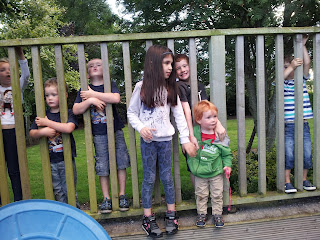 I legged it.  I don’t mind being honest about that.  Me and camping would not get on.

I packed up Smallest Boy late Friday night and took him away from the camp site and home to a bubble bath, leaving the others to it.

He was asleep a whole hour before his brothers and cousins who didn’t stop talking and messing until after midnight.

The next morning, at 6.30 there was more great excitement.  A leprechaun hunt was being arranged in the neighbouring woods.  Mister Husband was busy sourcing a small hammer, some brass nails and a piece of leather he fashioned into a wallet.

Grandad had old money and some coloured stones to add to the mix.

In the woods, grandad, Mister Husband and Juno went ahead to lay out little piles of evidence to suggest leprechauns were living there.  It was hard work keeping 11 kids at bay but we plied them with buns and Mi Wadi.

The treats held their interest only for so long and we eventually had to let them off. 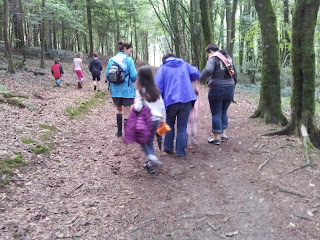 At last the first hoard was discovered, in a rotting tree trunk of all places. 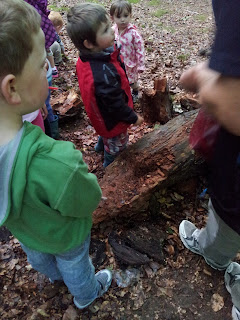 Out came a hammer, which was suspiciously like Mister Husbands and the boys pointed this out.  No flies on our lads.

A few little nails for making shoes, don’t you know, some string and a scrap of leather. 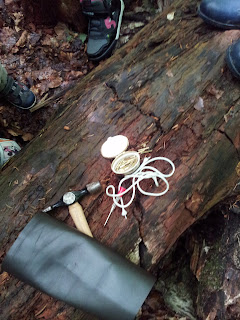 Grandad explained the purpose behind each item and it was all digested with great interest. 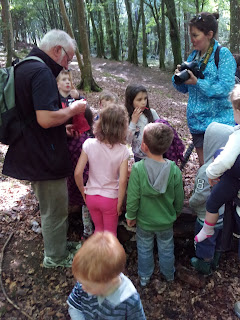 “Are you making this stuff up?”  asked Oldest Boy.

Time to move on.  And quickly.

On route to our next discovery, we met two other people out walking.  Word got out very quickly what we were up to and just like that we had an extra two kids and two dogs, buried into the next find.

It was money this time.  And a precious stone or two, hidden in a little glen where the sunlight filtered through and made sunlight puddles on the path. 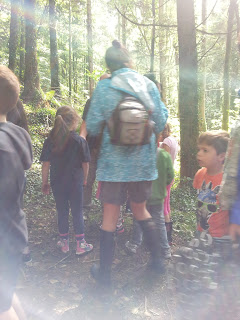 All this treasure finding was hard work so some play was necessary and we headed off in the direction of the sand pit.

On the way the kids took time out on a large rock where, low and behold, some careless leprechauns had left their money. 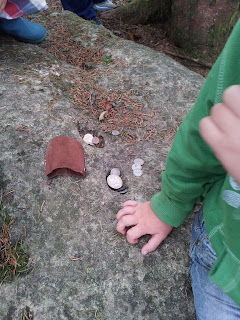 One of the kids suggested maybe they heard us and fled the scene, neglecting to take their gold with them. 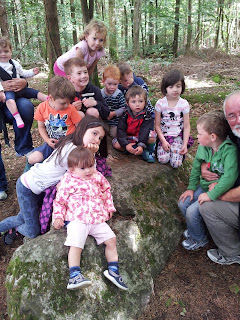 We herded them off to the sand pit where they spent a hair raising ten minutes or so scrambling up, loosening lots of rocks on their way. 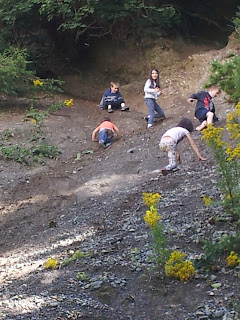 To say they all had a great time is an understatement.  It was great to watch our offspring enjoying the same woods we did as kids. 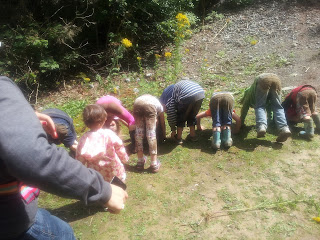 I was practically reared there but of late, they seem to have gotten smaller.  Or maybe I’ve just gotten bigger.

Usually when I bring our lot up there, as soon as we arrive the questions came hard and fast:  “Was that a squirrel?”  “Did that sound like a wolf?”  “What if we get lost?” And once, “do dolphins live in the woods?”

The older two boys put on their David Attenborough hats and look for “extreme wild
animals.”

In Mullaghreelan Woods, it doesn’t get more extreme than badgers, foxes, grey squirrels and birds.

And the odd dolphin.

But if you’re very lucky and very quiet, maybe even a leprechaun or two.