The Strive Towards 10k 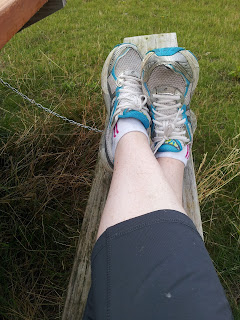 That was a while ago.  Before the lovely weather hit.  I was flying along.  Delighted with myself.

I even managed to hit 7k twice in a row and was well chuffed with how comfortable I found it.

And then it all fell apart.   Pride comes before a fall they say.  That and I realised I am not a summer runner; more of a cold, pissy, wet weather runner.  The nice weather had arrived and it was impossible to run.

I struggled from the outset and no amount of mind games seemed to be working.  It was just too damn hot and too hard so I succumbed to it.  Decided to run in the evenings when it was *a little* cooler.  (It wasn’t!)

And then I went and bashed my toe during an IDI.  (Identified Drinking Injury)

It was one of those gloriously, still warm summer nights and Mister Husband had put up the gazebo/marquee type tent we have.  The boys were still outside playing and I was watching them whilst slugging back sipping a bottle glass of wine.

I will fondly remember that evening because Shy Boy taught me how to play Rock Paper Scissors.  Then my glass was empty so I ran towards the house for a refill and didn’t clear the decking, bashing my foot off it.

The crack of bone!  The stars!  Then the pain!  The pain!

I had a good ten seconds where I had to concentrate really hard so I wouldn’t cry.  The boys had already descended into an open mouth shocked silence before anxiously asking was I ok, as I lay sprawled on the decking, I didn’t want to make things worse by bursting into snotty tears.

That was four weeks ago and I have only recently been able to wear shoes again.

I’ve since strapped back on the running shoes and gotten back on track.  And it’s been great.

It’s been wonderful.  There’s nothing like it.  I’m running my usual route, no more, no less.

And do you know what?  My little circuit, the guts of 5k, is good enough for me.

But I also learned something during that four week break.  Ok, more like five weeks.

I learned not to leave the bottle of wine inside whilst sipping al fresco.  Instead I am going to invest in a wine cooler and bring it outside.  Much safer.

Either that or ask one of the boys to fetch the bottle for their almost-on-her-ear-mother.
at 19:47