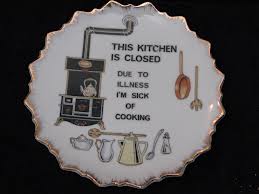 “This kitchen is closed due to illness.  I’m sick of cooking.”
Nights out are like buses – you wait ages for one and then two of them happen along together.  I’m going out!  I’m going out!  I don’t care if I end up drinking *down the line, I am finally getting out! Ok, so I do care, a little bit, if I only end up drinking down the line; but my point is I am getting out.   The last time I bought something new was over a year and a half ago and it was a maternity jeans.  I’d had a growth spurt while I was sleeping and the jeans that fit me the previous day, were refusing to go up and over my rapidly expanding bump.  I had maybe 6 weeks to go and it almost killed me to have to buy another pair of jeans that (a) I didn’t like at all and (b) would only fit me in the XXXXXXXXL size.  I did cry a bit in the changing room.  My bump looked like one of those water balloons; transparent and fit to burst.

So last weekend, fed up and feeling shite because I have been wearing the same two, ill-fitting trousers all year, I decided to treat myself to new clobber in honour of my night out.  And guess what?  I managed to fit into one of those skinny jeans in a size small!  Woot!  Ok, so I may not be able to sit down and if I do, it is quite possible that speech and or breathing will not happen either but I don’t care.  Check out my size small jeans!

So the jeans are size small (l might be saying this a lot.  Get over it.) and the guzzling of up to a pint of green water a day is going well.  The weighing scales told a different story however, and despite my extreme annoyance of same, I take consolation in the fact that something is definitely happening.  My tummy appears to be going in.  Yes, there is still wobble-age and some road map-age but there might also be some toning up-age going on too.  My size small jeans say so.
I think I’ve got my chocolate pusher, sorry, health food shop owner to thank for that.  He is thrilled with me.  Apparently there has been a great run on the Matcha Green tea of late.  He might find a few people popping in to try the Cacao and Coconut slice this week too.  I’ve been busy promoting it for him.

I am beginning to think chocolate isn’t such a bad thing.  There are worse, much worse things you could be eating.   This week I witnessed the 18 month old helping himself to the dry puppy food.  He’s very good though and I am obviously raising him to be a thoughtful, caring individual because he never forgets the dog, whose food he is pilfering.  They are great friends and to see them sitting together, side by companionable side on the decking, would put one of those Norman Rockwell paintings to shame.  Brendan has a fistful of foul smelling puppy nuggets.  He pops one into his own mouth first and then holds out another to the patiently waiting Juno who gently accepts it and waits for the next one.  I’ve finally admitted defeat.  I have also given up stopping him when he gets down on all fours and laps from the dog’s water bowl.  What?  The child has just eaten. He’s obviously thirsty.

I’ve had the pleasure of play dough, Rainbow Bright coloured poos. During the summer there was more sand than anything else in the same child’s nappy and this week, I thought it was a sweet corn kernel at first until I remembered we didn’t actually eat sweet corn for dinner.  It was a Lego man’s head in his nappy.   So, chocolate even dried puppy food.  It’s all goooood.

October 5th – ten stone eleven and a half pounds
October 12th – ten stone twelve and a quarter pounds (up three quarters of a pound.  Boo!)