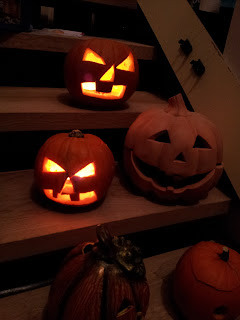 What have they all got in common?

No, I didn’t dress up as Maurice Gibb but the Bee Gees had a number one hit with You Win Again in 1987 (now I feel really old!) and the song always reminds me of a great Halloween party where it was played over and over and over again.  It was a recording from the radio onto a cassette tape and we took turns rewinding it back to the start.

I can’t remember what I did dress up as, but I am pretty sure black bin bags were part of the costume.  Weren’t they always back then?

Who wants to be a witch?  Who wants to be a wizard?  Here, take this em, black bin bag and knock yourself out.  Not like today when excellent Halloween costumes can be bought for as much or as little as you want to spend on them.  A far cry from a 50p plastic mask that gave you the sweats.

Pumpkins were an exotic vegetable (or were they a fruit?) that were the sole reserve of America and only to be seen on our television screens.  It is only in recent times they have become readily available.  Back then we improvised and carved turnips into Jack O’Lanterns.

I’ll never forget making them.  It was a dangerous endeavour, worthy of its own health and safety warning.  Turnips are hard, solid little yokes and it was no mean feat taking a large knife to one and attempting to first saw off the lid and then scoop out the cement like insides without losing a finger or two.  My hands used to be raw!

Then there was the small matter of chiselling out the face – knife through the palm of your hand opportunity right there.

Our mother surely must have noticed the depletion of her turnip stock but she never said anything.  The next conundrum was how to light it from within.  Tea lights hadn’t been invented yet and birthday candles burnt for all of 9 minutes.  What to do?  We hatched a plan.  Our hearts used to be in our mouths.   This is what we did.
We stole candles from the church.

There!  It’s out.  I’ve come clean after all those years.  My Catholic guilt ran deep.  Or maybe not deep enough. It was terrifying but the need for candles with a decent burning shelf life took precedence over any burning fires of hell.  My nervous bladder almost made a show of me on these occasions.

You know those urban myths where burglars defecated during a robbery?  Not an urban myth.  Nu uh!  Apparently it’s a nervous disposition borne of getting rumbled that makes them loose the run (ahem) of themselves and not devilment.  Fancy.

Halloween two and a half decades ago was definitely a more innocent time. We had a couple of bonfires too.  We would trek the fields from September, pulling loose brambles and sticks from the hedges and piling it high in our back garden.  The real lumber killing was when the farmers came out to trim the hedges.  Easy pickings.

One year the bonfire was so big, our father had to take half of it down to light it.  Too dangerous.  Because our bonfire was conceived in early September, born mid-October and its time of death was October 31st, it never occurred to us that there could have been little hibernating creatures underneath that mountain of wood.

And you can’t have burning without mentioning an old favourite Halloween horror movie of mine:  that fright night reject Freddy Krueger.  We used to scare ourselves silly watching Nightmare on Elm Street and then walk home in the dark afterwards, singing the song.
And the pineapple?  Believe it or not, that Bee Gee Halloween was the first time I tasted pineapple.  Sure, I’d had the tinned stuff but not a real life, juice dribbling down my chin after the first bite, spikey pineapple.

I love Halloween.  I think I prefer it to Christmas.  Last year I threw a little Halloween party for the kids and their cousins. Great fun.

Not a bonfire in sight.  No apples hanging from the ceiling on a piece of string.

Remember the game with the pile of flour and a grape perched on top, where you took turns slicing the flour until someone made the grape fall?  The “loser” would then have their face mashed into the plate of flour.

They didn’t do that either.

There was no ducking for apples or money.

It was all face painting and very impressive looking, almost professional costumes.  We had two large pumpkins carved and lit on the stairs.  Propped up beside a terracotta one.
The house was decorated with cobwebs and witches broomsticks took pride of place outside the front door.

Despite the aesthetic and commercial differences of almost 25 years later, the main attraction was a big bale of straw out the back garden.  The kids had pulled it asunder and were having a great time in it.

This year the big hit was a small bonfire.  The kids went to bed smelling of smoke and had marshmallow and Oreo cookies smeared on their faces.  As a friend pointed out “dirt will be easily cleaned in the morning but the lifetime of happy memories will remain for ever!!”

At the school gate there was a peacock with incredible feathers.  Dracula’s in their dozens.  Plenty of princesses.  Wandering warriors.  A ghoul or two.  A granny grunt.  Some pirates.  Spaced out zombies.  Transformers galore.

But not one single black bin bag in sight.
Happy Halloween.  Be safe.  Be seen.  Let the sugar rushes begin!
at 18:18