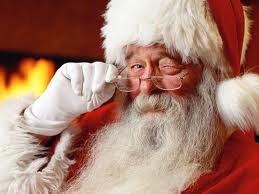 That time of year again, eh?  Tell me about it.

It is also a time of change.  On a daily basis, no fek it, on an hourly basis I can be heard bawling at the Awesome Foursome to “please stop fighting with each other,“ and “Stop shouting!!”

Ironically I’m usually shouting this a whole ten decibels louder than them.

And the tree is up.  Somehow I think “stop fighting with each other, for god sake” will be replaced with “shut the door.  The dog is eating the bloody tree!!”

The joys, Santy, the joys.  And there are many of them.  Don’t get me wrong. But I won’t bore you with them at this precise moment in time as I understand you are a busy man.

So I will cut straight to the point and help lighten your load a little bit, ok?  I’m like that, see?  Nice and helpful.  So take note.  These are the things/yokes/useless toys I do not want to see on Christmas Day.  It’s a bit of a long list so have your red pen at the ready.  I’ll start off with the nice and easy to remember, as obvious as the nose on Rudolph’s face stuff.

Cuddly toys.  About as useful as an ashtray on a motorbike.  Awful dirt and dust catching things.  Our cuddly toys, the ones that have managed to escape the dustbin, are out in the garden for the dog to chew on. Just, I don’t know, leave them on the roof or something.

Next on the list is anything that makes noise or has flashing lights.  I have four kids.  Count them.  Four.  They are soft and pliable, not plasticy.  They may not flash.  Oh wait, one of them does.  But they are noisy.  All of them.  I do not want to add to that mayhem ok?  Leave the noisy yokes behind.
Battery operated items that require a dolls screwdriver to open are next on the hit list.  I have big person’s hands.  Ones that are starting to seize up and it is next to impossible for me to open these gadgets and stick in a battery.

Glittery stuff, play doh, any toy that blows out bits of tissue paper requiring the child to catch them with a net (WTF is that all about?) follow as big no-no’s.

I’ll let you away with Lego even though Lego breaks all of the above rules.  Except the glitter one.  Lego is indeed, made of small parts that require an adults assistance to assemble, but Lego, to give it its due, rocks!!

So that’s the what not to give the kids.  I bet you’re wondering what the jingle bells can they have.

I’ve given my say so on Lego.  Books are always a winner. In particular those of the encyclopaedic variety.  The solar system and dinosaurs are not far behind.  Please though, try and keep the Peppa Pig ones to a minimum.  Be advised that anything with lift up flaps will be eaten by the dog.

They love to draw so anything in that area would also be a hit.  The best part of my Christmas morning was never the “big” toys, rather the stocking that was bulging with unidentifiable shapes.  If you want to throw a few novelty pencils, some stickers, chocolate coins, new socks and underpants, I won’t stop you.

Oh, keeping them away from the comics in the supermarket hurts them more than it hurts me so if you have a spare twenty quid after all of that, pick them up some.  Word of warning though; the older two should have the same ones.  Liam will be happy with that pig creation Peppa, Mike the Knight or some such.

What’s that Santa?  What would I like?  I am so glad you asked.

OK, let’s see.  Again, not too difficult.  Sometimes I think I would like a mid-life crisis but realistically I know I would fall asleep during it and mortify myself.

I asked for time last year, didn’t I?  I am a creature of habit it seems as guess what big guy?  It’s back up there on the best seller list again this year.

I have enough Stuff.  I never thought I would hear myself say that.  But I do.  I could stuff a second house with all the Stuff I have.  Stuff that has not seen the light of day for two years or longer.  Stuff that I never wear nor have use for.

I honestly would prefer for the kids to get their Stuff.  I, on the other hand, would like time very, very much indeed.

Just a half hour.  Maybe forty minutes every day over the holidays to get out into the fresh air for a run to clear the head and the lungs.

If you could also see to it that my new running shoes (Green!!!!!  Eeeeeeeeppppp!!!!) are in stock by the weekend, I would be very happy indeed.

That’s all. I am a simple soul with simple needs.

Oh, wait!  I knew there was one other thing.

I’m not sure if it’s you or some other fictitious character I should be thanking for this but we are fortunate enough as a family to enjoy rude health.

Two, maybe three, visits to the doctor over the last 12 months for very minor complaints have been the height of it this year for us.

I would most definitely like that to continue for 2013.  I would quite happily give up my requests for time and green running shoes for this to happen.

And finally, definitely lastly, if I’m asking for stuff; Santa, all I really want for 2013 is a fat bank account and a skinny body. Let’s try not to mix the two up like you did last year. Ok?

Ok, so I kind of robbed that one, Santy.  I saw it on Facebook and it really tickled me so I thought I’d stick it in here.  You don’t mind do you?

But if you are into granting wishes, you might just keep that in mind all the same.

Just chancing my arm there.

I’ll let you get back to it.

Cheers Big Guy.  All the best and please, please don’t forget to visit my gorgeous boys!!