Monday with Pictures. Our Dog Child 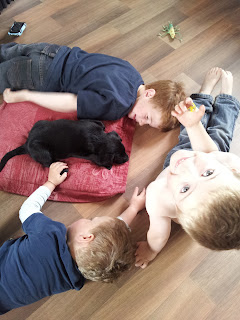 So the puppy and Smallest Boy are besties.  It’s kind of cute to watch.  They are growing together and getting into all sorts of devilment together too. 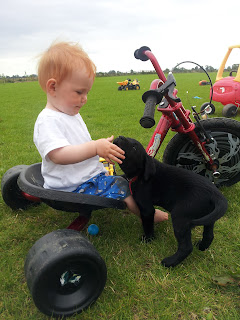 When Juno (the dog) came to live with us, Brendan (the Smallest Boy) had just celebrated his first birthday.  I think he viewed the tiny black lab puppy as a funny looking cuddly toy. One to be watched at all times as this cuddly toy leaked on occasion and was rather fond of chewing on Brendan’s ears when he was sitting down.

Juno didn’t get enough credit for being the one to force make Brendan walk.

In the early days, Brendan liked to pull on Juno’s whiskers.   He was also a tad fascinated with her tail.  In spite of all the rough handling Juno received from a toddler, she has never once snapped back. 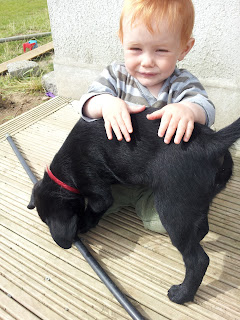 I thought it would be the seven year old who bonded with the dog but it seems Juno and Brendan have connected deeply.  So much so in fact I am not sure if Brendan knows where the dog ends and the boy begins. 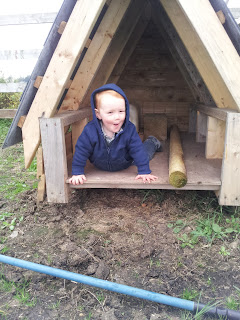 Juno is the first person Brendan looks for when he wakes from his naps.  He stands up in his cot, looks out the window and clicks his tongue.
I swear the dog can hear him because she appears, pushing the door open with her nose.  I am forgotten as dog and child greet each other through the bars of the cot. 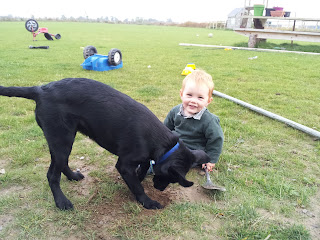 Brendan has formed another deep attachment to something.  It is an item of clothing.  Namely a pair of tights.  They are his comforter.  Juno likes them too and she will often disappear, when Brendan is having his nap, to reappear moments later with the bloody things in her mouth.

She has gone to the bedroom and pulled them from underneath her sleeping smallest master.

Then the blood curdling screams start as Brendan is woken by the tights being pulled from underneath his body.

They share everything.  I have lost count of the number of toothbrushes that had to be thrown out. 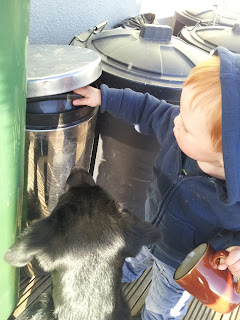 Small affectionate nips are delivered.  Stuff gets carried around between teeth.  Favourite snacks include dog nuts and the odd bone.  Wooden sticks have also found their way into the house.

The other day I walked into the room and caught him doing this. 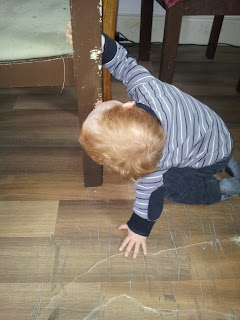 Oh, sorry.  I wasn’t clear.  That was Brendan I was referring to.  Not the dog.  Brendan has acquired some of Juno’s mannerisms.

Potty training next summer should be fun.