Spending a Penny with Four Kids 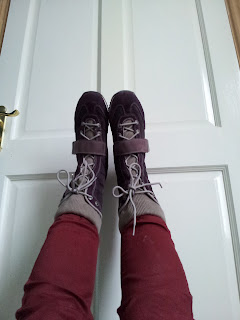 It ain’t easy folks.  It just ain’t.  What do you do when you are in the supermarket with a half full trolley, four kids and the three and a half year old suddenly goes into Michael Jackson mode and clutches his front nether regions?

It’s hard to miss the jigging up and down but it’s the little face that catches my attention every time.

He looks at me with huge, bulging eyes and his lower lip caught between his teeth.  Sometimes he makes an urgent um um um noise.

I promise, I’m not that scary so I don’t know why he looks like I am going to make him pee in on top of the flowers.

If the supermarket is quiet, I ask Oldest Boy to take him.  But on this occasion that wasn’t flying with Liam.

And I suppose he can’t.  Note to self:  Forget trying to get them to clean up after themselves.  Teach them to wipe each other’s tushes instead.

So back to my question: What do you do when you have a heaving trolley, four cling-ons and one of them needs to “go?”

I think on these occasions using the disabled toilet is allowed if the parent and toddler room is otherwise occupied.

It’s a bit safer and quicker too.   The parent and toddler room in the supermarket we frequent has way too many distractions for my liking.

Namely: a rocking chair, a smelly (absolutely foul smelling) bin, one of those wave-your-hands-in-front-of-me-and-I-will-spit-out-twenty-five-trees-worth-of-blue-tissue-paper machines, Winnie the Pooh stickers that are thankfully too high up for them to peel off the walls, soap dispensers and a nice baby change area that they like to climb up onto.

Seriously though, makers of public rest-rooms, you need to start making bigger cubicles for parents of two or more kids.

I rarely get to visit the bathroom, any bathroom, unaccompanied.  I am thinking of contacting the Guinness Book of Records with my attempt at cramming as many kids as possible into one small space.

Previously this title was held by my parents, with their own small parish, namely us, climbing out of our orange car outside the church of a Sunday morning in Catholic Ireland.  At one stage I think they even managed to pack a Moses basket in there.

But back to the public lavatories.  Last weekend in a shopping centre I found myself in the usual predicament of using the facilities with the lads present.  I was trying to prevent one of them from opening the door by keeping my foot pressed against it.  No mean feat when you are also trying not to squash a second one against the wall whilst trying to stave off a hit and miss situation.

I gave up and removed my foot.  The door was subsequently pushed open by an unsuspecting young wan who got an eyeful.

I’m sorry if you are still crying but the noise levels should have been your first clue that several people were in there.

Oh for the days when all that accompanied me into the bathroom was a small shelf load of toiletries and several large fluffy towels.