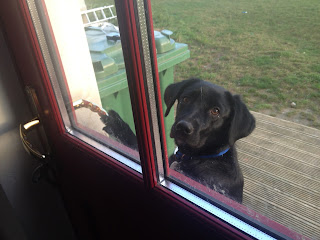 Awwww, I thought.  Isn’t that cute?  Smallest Boy is waking me up by giving me a nice, good morning kiss.  Ok, so it’s a bit slobbery and…………….. Jayzus Brendan!  Did you eat a dead mouse overnight?  Your breath stinks!

Our Juno loves me.  She loves us all.  And we love her too.  Particularly Smallest Boy.  Their connection is uncanny.  I wrote about this kinship previously so I won’t repeat myself.  Check out http://www.wonderfulwagon.com/2012/12/monday-with-pictures-our-dog-child.html to see for yourself.

This is a post about Juno.  Our clever, lovely, shiny black lady.   Don’t worry, I haven’t morphed overnight into the world’s biggest dog fan or anything but I am particularly fond of our mutt.  It’s hard not to be.  When you live with an animal (yeah, yeah smart arse down the back.  Those are my kids you’re dissin’!)  As I was saying before I was so rudely interrupted, when you live with an animal that is as clever and sensitive as Our Juno you begin to view the furry creatures in a whole new light.

She was ours for just three months and she figured out why someone who is such a shite cook, (that would be me) spends so much time in the fridge.  She twigged that is where the chocolate lives.  The real humans in the house still haven’t sussed that one.

These days Juno will sit on the floor and stare with her head on one side as I am having some chocolate.  When none is forthcoming, for her, she will step forward, place her chin on my thigh and put a little bit of pressure behind it.  She literally presses with her jaw and turns up “the eyes” a notch, knowing I am powerless to resist such cuteness and she gets her prize.

Her latest trick is being able to open the back door with her paws to let herself in.  There is a three and a half year old in the house who has trouble with this door and Juno has it nailed.
I am fervently hoping she learns how to close it behind her.

She is also our doggie in the window.  Whenever we are in the car, she jumps onto the couch and looks out forlornly as we drive off and desert her, leaving her with no water and food.  For two weeks at a time.

No. Of course we don’t do that!

A school run takes anything from half an hour to an hour in the morning because I like to chat to the Other Mothers and sometimes maybe have a coffee and scone with Mister Husband afterwards.  Juno is always watered and fed before we go.  She has her morning toilet and she even gets to have a little telly time with the boys.

Most mornings she will even get one of those little puppy markie treat thingy’s to entice her back in to the house before we leave.

It seems our there-is-no-way-she-will-be-allowed-come-into-the-house-dog is well and truly a house dog.  I couldn’t, wouldn’t leave her outside.

One time she jumped into the car with us as I was loading the troops for a school pick up.  Grand I thought, it’ll be good for her to get used to the car.  I’ll do it in stages, I thought.  To the school is not far.

I started the car and she did her little WTF wobble and fell flat on her arse.  The lads roared laughing and I did my Driving Miss Daisy impersonation out the gate.

Shortly a wet nose appeared around the corner of my seat followed by a shiny, black body.

The first clue that she wasn’t happy.  I was still doing 10k.

Then the howling started.  Oh wait, she urinated into the little holes in the floor first.  The ones where the extra seat would slot into.

So first she weed everywhere with fright and then the howling started.  The most eerie sound I have ever heard.  And I know what foxes sound like in the dead of night.  Scary bejayzus stuff.  I have heard cats screeching and yowling their heads off during mating rituals.  Horrible sounds.  Horrible.

I am also familiar with the fracas small children make when they are beating the crap out of each other over a piece of Lego.  This is the worst sound yet.

Until the day Juno howled in the car.  After she wee’d.  Did I mention that she wee’d?
I got to the top of the road, took a left instead of a right and drove back home.

The dog jumped out as soon as I opened the car door.  She skittered, slid and scrabbled her way over the gravel to the front door where she practically clawed her way back into the house.

I think it is fair to say she didn’t like the car.

She is due to be neutered next Friday. (My poor baby!)  I might have to carry her in on my back.