A Good Day to be Seven 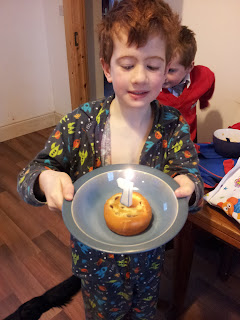 I was about 10, possibly younger, when I saw my first nosebleed.  It wasn’t mine.  But it frightened the life out of me all the same.  So much blood.  From one nose!  My poor cousin.  I remember feeling pretty glad that it wasn’t my nose.

She was in a terrible state, as you would be, blood everywhere, least of all on the floor.  And it wasn’t stopping by all accounts.  I know this because I heard someone say it.
The words were muffled because my hands were covering my face. Or maybe I had my back turned and it was the blood rushing through my ears that deadened the sound.  I’m still not sure.

“Stick a cold key down her neck.”

I looked at my Auntie Sue and her friend in horror.  I fervently hoped I would never have a nose bleed.  And definitely not in my aunt’s house.

Of course, they meant press the cold object to the back of her neck and not ram it down her throat.

But I didn’t know that.  I was but a child and took everything literally.

Another time, I split open my own face on the side of a school building.  I couldn’t see my injury but sweet Jeebus, everyone else could.  My lip needed its own passport.

Blood everywhere. I remember following a couple of teachers around the corridor as they discussed what could be done with me.

“The doctor.  She’ll need to go to the doctor.”

I was about 8 I think and the word “doctor” was enough to make the blood turn cold in my veins.  I wasn’t aware of it, but I hatched a dastardly plan.  I was going to kick the evil Doctor Pork Chop as hard as I could, into the shins, the first chance I got.  That would teach him to sneak up on me with his silver kidney shaped dish, containing shiny, sharp, torturous looking implements and daring to mention the word stitches.

Again, I was but a child and to me stitches meant a darning needle and thread.  No-one was doing that to my face if I could help it!

Another Fred West cellar moment happened when I was still in primary school.  Noticing a theme here?  Yeah, me too.  Don’t go to my childhood school.  Good things can’t come of it.

This time it was at the dentist and my poor sister had the misfortune to be the first one up on the chair.

They tried, I’ll give them that, they tried to get me up next but my feet suddenly rooted themselves to the floor and nothing short of a boot up the arse was going to make them move.

I managed to get through the rest of my pre-pubescence and most of my teens without drama or trauma.

Until two days before my 18 birthday when I was knocked off my bicycle and carted off to hospital in an ambulance.  With the nee-naw going and everything.  This one doesn’t really count as I have no memory of it at all.   But I do have the scars as proof.

And then I was back in the hospital.  This time to have a baby.

But here’s the weird thing.

I had been in full blown labour since 11pm the night before.

I’d had a lovely little snooze for myself courtesy of some numb from the waist down drugs, the mid-wife was looking up at me from Down There and asking was I ready to have this baby.

And only then, after 10 months and 8 hours of labour, did it hit me.

I was having a baby!  Now.  Holy shit!  Really, really now.  This was really happening.   Even when I had been admitted the previous day for induction, it never crossed my mind that I would be walking out of those hospital doors a couple of days later with a real life honest to god, ready to take home, baby.

I think it’s fair to say fear of the unknown prevented me from thinking about how my life was going to change.

It took that midwife and her innocuous query to snap me into reality.

That was seven years ago today.

These days I know how to stop a nosebleed.  Steri-strips are a much kinder way to treat a split lip. I am secure in the knowledge that dentists and their chairs are not to be feared and I make damn sure I look before crossing the road.

Conor Dooley came into the world at 6.20am on 19th February 2006.  It was a bright, Sunday morning in spring and I fell in love with him immediately.

He is my first baby, not my last and one quarter of the whole that completes my everything!