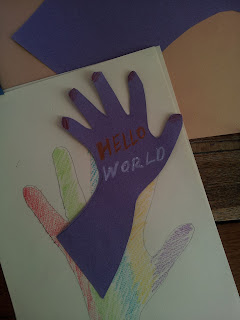 It’s not very often I agree with everything I read, or discover a gem that makes me laugh out loud.  Indeed, sometimes I laugh when I am not supposed to.    Other times I see something that I really, really like and I get cross because I wish I had written it.  Then there are the ideas that anyone can follow and generous people put them out there for that very purpose.

This is one of them.  I would like to give full and proper credit to a fellow blogger for the inspiration behind this post.  She writes at www.themamaship.ie and she speaks the truth!

Niamh has blogged about what she calls a slow living experiment and I like her way of thinking.  In a nutshell, she shuts down.  She retreats and just “is.”

She takes proper time out to “be” and to chill with her young family.

Having been licked good and proper by a good old fashioned case of The Guilt’s lately concerning how much time I spend on Facebook and the computer, I decided to take a leaf out of The Mama’s Hip and have a go at a slow living experiment myself.

The rules are easy and as follows:  Be with your kids.  Do stuff with them like baking, reading stories, or drawing.  Get out of the house but most importantly, do not sit down at the computer, lay off your phone and I suppose, pay a bit of attention to them.

So over Valentine’s Day and Friday of last week, we took it easy.  Ish.

I was wrecked though!

Late wake ups in our house just don’t happen but I still clung to a little shard of hope that Thursday morning might start at 8am.  It didn’t of course and we had just four hours to kill before we went to the pool at 10am.

The swimming idea ticked all the boxes.  It would get us out of the house, away from the television, Facebook and hopefully, we would all enjoy it.

So in order to pass some time, the boys watched an oddly dark yet charming kids film by Tim Burton called Frankenweenie.

A lot of coffee later, we all went for our wash swim. 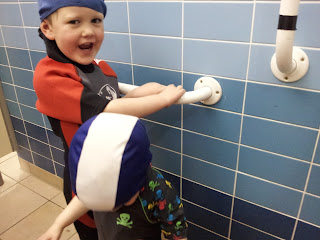 We practically had the place to ourselves which was great as Lovely Liam was able to complain loudly about the cold and how he was going to sit on the side and wait a little while until it cooled down. He meant warm up.  He is temperature sensitive (or something else) and gets his hot confused with his cold.

After forty minutes or so I ordered them all out for a shower.  With 4 small kids, this takes longer than the swim itself.

Talk of pancakes and hot chocolate afterwards got them hauling ass fairly quickly.

That afternoon as Smallest Boy slept, I stuck to the gone to ground rules and brought out large sheets of paper, the colouring box, some scissors and a glue stick.

The boys morphed into town planners extraordinaire and created a paper Lego wonderland for their Lego figures. 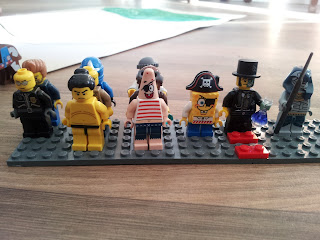 I managed to sneak away to the kitchen and bake chocolate banana bread which they demolished after spending a couple of hours outside with the dog.

It was all going very well indeed and when I was making a pitcher of Monkey Business smoothies, Conor gave me a hug and told me he was having a lovely day.

I didn’t have time to let it go to my head as very shortly after that another one was telling me he hated me when I asked him to clean up a mess he had made.

Friday dawned the usual way – not very bright at all but early.  Keen to keep me on my toes the questions about what the plans for that day were began.

My plan, again, was to get us all out of the house and kill two birds with the one stone.  So we went grocery shopping.

Slow living experiment or not, we still had to eat.

And I was craving a cappuccino.

I often go to the supermarket with the four of them in tow.  I kind of like it.  I’m a bit hammered out like that.  Yes, I stress.  Yes, I say, “no, put that back” and “watch the lady!” a lot.  Yes, they get treats.  Edible treats to keep them quiet.  But I think they enjoy it too.

I send them off to get the baby wipes and treats for Juno.

Then I silently freak when one of them doesn’t come back quickly enough.  But usually it ends well.  None of them have overturned the trolley.  I saw this happen once.  When I was younger.  Food and yogurts everywhere, the frightened child and the horrified mother.

The biggest hurdle I encountered in the supermarket was trying to persuade Lovely Liam to have a bag of Organix carrot sticks instead of a tiny skateboard thingy that cost €7.99 and could fit in his mouth and would definitely end up in the dogs.

After a fashion I got the trolley safely to the check out and the boys went to assemble their Lego figurines on the benches in the shopping hall.

We had a home to get to where the lads were planning on playing Lego: The World is
Ending swiftly followed by Attack of the Killer Humans.    There was also great chat about continuing on with the paper road works.  This slow living experiment was catching on!

But first a take-out coffee for me.

The afternoon passed fairly uneventfully.  Hotel Transylvania kept them more than amused in between drawing parks and hotels and eating roast chicken sandwiches. If you ask me, gone to ground day also means no cooking.

It wouldn’t be a proper slow living experiment without planting spring bulbs followed by pancakes for tea. 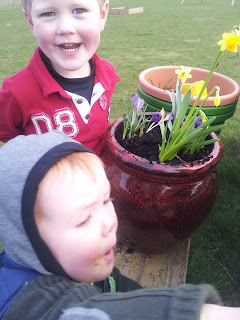 Broadly speaking that is what we got up to.  Of course there was the usual minutiae of day to day life like breaking up fights, picking up after them, endless, endless snacks, drinks, nappies, copious clothes changes, bathroom visits, retrieving items of clothing and filthy, muddy shoes from various locations.

I cheated a bit and checked in with Facebook a couple of times but kept it brief.

And that was just Thursday and Friday. I still had the weekend to get through.

So why did I do it?  Like I mentioned earlier, an attack of the guilt’s was a major factor.  I was also curious to see how it would pan out.

I expected it to be hard.  And it was.

Usually, whenever I sit down, it is with one or two of them hanging out of me, fighting over perceived rights to my lap while I use contortionist moves to swig a hot drink.

Their delight at having two free days from school and me there to entertain them was undeniable.

I always welcome bedtime and with them being on their school break, they stayed up a little later than usual.  It all adds up.

I didn’t sit down much and I certainly didn’t “write down any of my ideas” and to be perfectly honest, not having those little breaks, made a difference.

I snuck off to the bathroom a couple of times just to look out the window.  The clack clack of dog nails on the floor or the bokkity wheels on a Little Tykes Cosy Coupe alerted me to having being discovered.

Would I do it again?  Probably.  In fact, with the Easter holidays just round the corner, I will have to.

It wasn’t all bad.  Facebook survived without me.  And I without it.  The lads had a great time.  They spent loads of time outside.  As a result the washing machine was on twice a day to catch up afterwards.

I got out for a couple of runs which was heaven.  In fact those runs deserve a blog post all of their own.

We made blackboards.  From scratch.  This does get a blog post all of its own.  Tune in at the end of the week for the how to.

Then it was Sunday morning and guess what?  They all stayed in bed until 8am!!