Pancakes are Not Just for Pancake Tuesday 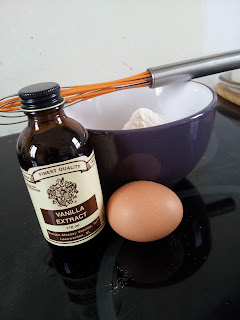 Who’s good at sums?  Here’s a little teaser for you.   I have been making pancakes at least twice a week for the last four years.  Averaging 5 *large* pancakes per bake.  How many pancakes have I made in that timeframe?

I’ll tell you; two thousand and eighty!  At least.  That’s a lot of flour, milk and eggs.  Oh and my secret ingredient would be a little splash of proper vanilla e|tract.

Now for a small admission.  I hate the things.  With a vengeance.  Not because I make them every Tuesday and usually on Thursdays, but because I just hate them.  The same way I hate butter.  And milk.

Pancakes contain milk and are cooked in melted butter.

As long as I breathe through my mouth as I make them I don’t mind.  There is something about dairy products when they are cooking that upsets me.

When our eldest was tiny, and of an age where he was *supposed* to be enjoying a wide and varied diet, he was surviving on a litre of milk and one yogurt a day.  For over a year.  I bought night shade vegetables, some of which I had never even heard of let alone tasted, and carefully pureed the crap out of them.

Before rinsing them all down the sink.

He did eat.  Sometimes.  But it had to be cardboard, a toilet roll tube, a newspaper, a tissue, a hard back book, an empty cereal box. As long as it was made of paper he would eat it.  I have since learned that this is an eating disorder called Pica.   Unless you are a puppy.

Anyhoo, fast forward four years and I am glad to say he is hugely improved.  One of the first things he decided he actually liked was pancakes.  When I hit pay dirt, I stuck with the formula that worked.  Thankfully, they all like the things.  So now they have them a couple of times a week.

I keep it simple.  Plain vanilla pancakes with caster sugar sprinkled on top for two of them and a scraping of Nutella (that old food staple again) for the youngest two.

None of your Cadbury’s Crème egg gunge, melted mars bars, strawberries and cream, or mashed bananas for us.

If you are of a mind to whip up a few, this is the basic recipe we use.

Half pint of milk.  One egg.  Nice splash of vanilla extract.  4oz plain flour.   Whisk the egg with vanilla extract and milk.  Add flour and whisk to break up lumps.  Decant (coz we’re posh) the batter into a jug for easy pouring.  The rest is easy.  Decorate as you see fit.

Just a handy little tip here.  A lot of people claim that they make a mess of the first pancake.  Leave it in the pan until little bubbles appear and pop before turning it over.

Happy pancake Tuesday everyone and let me know how you get on.

P.S.  Did the shopping Sunday morning and cheated big time.  Picked up one of those ready-made, pre-packed batches of rubbery pancakes.  Hey, the chances of me cooking on Sundays are slim to none.
at 19:33