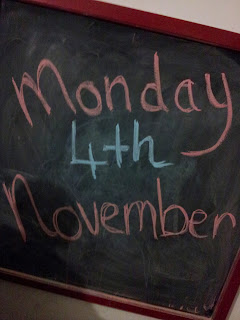 Monday.  It’s not the best day of the week.

November.  A winter month.  Nothing much happening.

But put them all together and they strike the fear of god into me.  Un-reasonably so.      It’s not as if I have never been in this place before.

Three times, to be exact.

See, I have decided (gulp) even marked it on the calendar, Monday 4th of November 2013, the day the boys return to school after Halloween, will be the day, the day potty training commences for the fourth time in this house.

It will also be six weeks till Christmas too but that just makes me shrug my shoulders with indifference.

Christmas?  Pah!  Been there, done that.  Loads and loads of times.  I’m an old pro at Christmas.

But I’ve only potty trained three times my whole life.

Lovely Liam pretty much did it all by himself with little or no help from yours truly, so I’ve only got two other occasions to draw help/confidence/experience from.

Did I gulp already?

Smallest Boy has been telling me for ages he has “lotsa wees in nappy” and “lotsa poo’s in nappy.”  He speaks in full, articulate sentences.

He knows his yes’s from his no’s.  He can use the word “actually” in context.  He refuses to be tricked when asked if he hates sweets.  “No.  Love them.”

He knows which of his brothers are coming down the stairs by the sound of their step.  He can tell, with alarming accuracy, which of said brothers did not flush the toilet after them.

He speaks fondly of giving his nappies “to the babies” and “getting’ Wonderpants.” The child talks non-stop!

He can and will remove his shoes, socks and trousers with little or no difficulty.  He knows what the toilet is for.

All the signs are there.  He is ready for potty training. He is more than ready.

But his mother isn’t.

Funnily enough I felt like this with the others too.  They all trained at different ages and within three days.

The first two days were a wee fest.  I was washing and drying Thomas the Tank Engine and Ben 10 underpants round the clock.  When I ran out of tracksuit bottoms, I resorted to pyjama ones.

Then it all clicked into place after the third day.
It was worth it, all the washing and drying, for those three days to be rid of day time nappies.

I just have to keep reminding myself of that.

I’ll have to dig out the piddle pad.

Yes, the piddle pad.  The trainee sits on it in the car and it soaks up any wee’s.

I’ll have to start bringing changes of clothes, underwear and socks with me everywhere again.  And shoes.

They never, ever miss the shoes.

If past history is anything to go by, everyone who is anyone will get a look at the big boy Wonderpants.  Whether they like it or not.