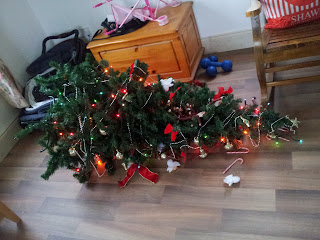 There are some places where kids are just not welcome: the bathroom when you’re in it, the pub, a china shop and the living room after 9pm.

And they definitely should not be with their mother when she is trying to do the Santy shopping.

Stupid I know, but sometimes there isn’t any other way.

I was in the shop with the four boys and Smallest Boy spotted a variation of his bubble lawnmower.  The one that doesn’t blow bubbles any more but he is still knocking great craic out of it.

I watched as he zoned in on it immediately, picked it up and tried to leave the shop with it.

Bingo!  That was his Santy present sorted.

All I had to do was figure out how to get from him without causing too much of a scene.

Then I had to get it to the till which was approximately five miles away and I would have to pass through the breakables section to reach it, without him noticing.

Then I needed to get it to the car, a short time later, out of the car and into the house, again without Smallest Boy or his brothers noticing.

It would have been futile to hope their radar for such things would run out of battery just because I needed it to.  I mean, that never happens when I hide behind the fridge door to eat chocolate so why should this time be any different.

I just had to bide my time.

Pretty soon the older boys spotted an unpronounceable action figure and as they ooh-ed and aah-ed over it, I sought out Smallest Boy who had disappeared from my line of vision.

That’s what I get for admiring crockery.

He was standing at the escalator with his forehead pressed against the moving handrail, with his head going bumpity-bumpity-bump.  He was staring at the ground so I was good to go.

I was stuffing the boxed lawnmower under my coat and at first I thought the man was going to apprehend me for shoplifting, but all he wanted to do was point out what Smallest Boy was doing at the escalator.

“That is the most amazing thing I have ever seen.”  He said, nodding in Smallest Boys direction who was still playing with the escalator but now he was laughing quietly to himself.

The man walked away shaking his head.  I like to think he meant amazing in an “awesome” kind of way rather than a “that poor, unfortunate child” way.

I cast a quick look around to see if anyone else was looking at him, got a tighter hold on the concealed lawnmower and legged it safely through the china mine field, up to the till.

Without breaking anything or raising the lads suspicions.  Despite carrying a rather large bag out of the shop.

It’s been said that a stay at home mother is similar to a heart surgeon and fire fighters; she is constantly in a state of high alert.

But they should change it to a mother doing her Santy shopping whilst in the presence of her kids.