The End of The Week 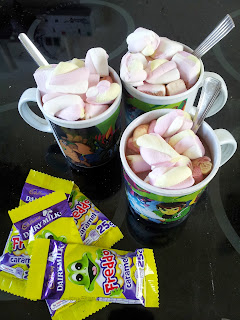 It is the end of the week.  Another Friday draws to a close.

I can congratulate myself on [still] having four healthy and happy kids at the end of it.

Three of them are currently in the scratcher.  There was screeching beforehand.  The kind that if a passer-by heard and reported, they would be forgiven.

It was just tooth brushing time for tired boys.

There is one still afoot.  Well, a-lying down.  He is watching cartoons but as he is quiet and not looking for stuff, he will be allowed to remain on the couch until such time as he does start moving and/or asking for stuff.  Then and only then will he be whisked up the stairs and into his own bed.

We survived yet another trip to the pool this evening.  The last ten minutes strongly resembled a salmon farm as the swimming lessons finished up and the aquatic students were released to their parents.  But instead of showering they jumped into the family swim lane.

Good old rashers and sausages for tea when we got home.  Followed by the obligatory hot chocolate and lashings of marshmallows.

The car had its NCT during the week.   I watched, biting my nails, at best expecting a FAIL cert with a dozen things to be corrected for a retest and at worst, being told to take it off the road immediately.

I was delighted and hugely suspicious when I was handed the expected FAIL cert half an hour later.  There was the grand total of just two things needing attention.  But who was I to question the gods.

We had a grommets check-up mid-week also.  We like to call it a four-for.  As in a four for one.  In other words we get them all checked.  Shy Boys are still stubbornly in situ. Kind of.  They are “just out” but as it distresses him to have his eardrum poked and prodded with a long metal piece of steel, they were left alone.

Lovely Liam’s are still firmly in place which is a good thing as they were only inserted a couple of short months ago.

So it is the end of the week.  I am particularly tired this evening and itching to get back to my new book.  The one I was saving all of my Eason’s loyalty points for.

But first, a beer.

There is always time for a beer.

Have a good weekend people.  Thanks for reading.
at 20:38