Doogie Howser is in the House

YOU KNOW those awful kids magazines that cost five euros or more, with the useless bit of plastic on the front?  Those ones?  The ones the kids are drawn towards with magnetic force?  Those ones?

Today Smallest Boy zoned in on one with a doctors set attached to it.  Your plastic stethoscope, a thermometer thing and a tube of something or other.

He has been a doctor since this morning and frankly I think the power has gone to his head.

Either that or he harbours sadistic tendancies.  I think I prefer the power trip.

He has swung from being Dr. MacSmallie with the lovely bedside manner to an injection wielding Doogie Howser in a matter of hours.

“Do you have a tummy bug, Mammy?”  When I confirmed that I did and I felt awful, his little face creased up in concern and he rubbed my hand so softly and so soothingly it was like being kissed by butterflies.  He proceeded to treat me with a “tiny bit of medicine” by way of the empty plastic tube and stuck the thermometer thingy into my mouth.  A quick listen to my chest, or in this case my right boob and it was confirmed there was indeed “a huge bug crawling around” inside me but the “medicine will make him dead and then I will get him out of you.”  Followed by another gentle hand rub.

“Come and get me if you don’t feel better in twenteen hours.”  Were his orders.  But in the event that he might not be available I was given full doctors permission “to get the medicine” by myself and, “take it.  Take it all, Mammy.”

Maybe not such a reliable doctor after all.  The signs were there.  But then again it was a cheap set of medical instruments.

By mid-afternoon he was swamped with appointments as his brothers were finished school and beginning their holidays (YAY!)

Obviously feeling the pressure of such a high powered job, the thermometer became a syringe.  From which he derived great joy out of injecting medicine into everyone, including the dog. 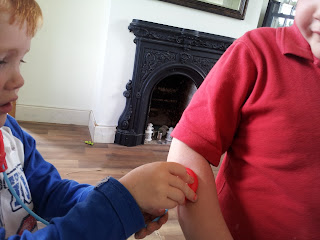 Clearly over his bedside manner he informed his packed surgery, “This is serious medicine that will make you puke your dinner out.  I will sneak up on the bug when him’s not watching and put the needle in him.  Then he will come out in an explosion.”

I bet he will.

Dr. MacHorrible wasn’t finished.  “This is a very big needle.  And it will very hurt.  Are you ready?”

I braced myself for the torture and when it was shoved into my stomach he apologised.
That’s more like it I thought.  But no.  Apparently the needle wasn’t “big enough and I have to stab you again.  Are you ready now?”

I watched as he pulled back the pullback thingy (technical term) and with great relish stabbed me with it again.

I was tiring of the tummy bug thing so I decided to switch it up a bit and I complained of a fake headache.

“Get ready for the needle!”  Yep, definite delight and relish in his voice.  He aimed it carefully at me and without further ado stabbed me in the forehead. 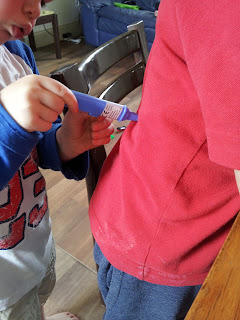 I think I might buy him a vet’s kit next week.  See how he gets on with that.

On second thoughts, maybe not.  The poor dog.