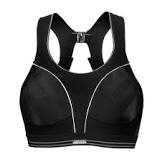 Well, I did it.  I got sick of looking and wanting but not getting and I went ahead and purchased my purple shock absorber. 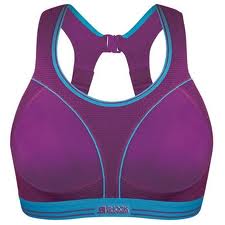 The first time I saw it, I knew I had to have it.  I kept logging on to the site to have a look.  It was my version of page 3.  Weird I know.  It was your usual image of the item on an invisible torso so there was nothing to actually look at except an inflated purple bra. But I was drawn to it.  So much so, when I first saw it in a magazine, I cut out the picture and stuck it to the inside of a cupboard door in the kitchen.  My own little mood board in the making.  The irony wasn’t lost on me that every time I wanted a cup I was flashed by the bra. (Geddit?  Cup?  Bra?)  Lovely.

I was also well and truly peed off trying to close up my black one with the broken hook and eye clasps. They aren’t hook and eyes any more. More like straightened out fish hooks so if I lean up against something I get stabbed in the back.  Bloody sore!

My white shock absorber is grey and is intact but it stinks.  Incidentally so does the black one.

Has anyone else noticed that after a while the stinky smell cannot be removed from gym clothes?  It doesn’t matter how often they are washed, how hot the water is or the detergent strength, the bacteria is forever trapped within.  Waiting to be released like a silent but deadly act of flatulence as soon as your body heat warms up the clothes.

Mister Husband has once or twice stood beside me and announced “Missus, you stink!” when I was clad in freshly laundered running clothes.

The shock absorbers and the lovely running tops with the hidden support of which I have become so fond, need to be replaced.

And also, the shock absorbers don’t fit me properly any more.  If it wasn’t for the aforementioned tops with the hidden support, I’d be in trouble.   I still am in trouble.  A little bit.  See, the great thing about running, a huge bonus, is that you will lose a few pounds as your body begins to change.  Change is a good thing.  Your legs change.  So does your arse.  Your tummy also begins to “go in,” – to that mythical place we all want it to go after we have a few kids.

But the change is also top side.  I have returned to my pre-baby days bra size.  In cup only, however.  I’ve gone up a bust number. So you see, I need a new running bra.  The ones I have are too big and smelly.  Can’t be having that!

I am very much looking forward to receiving that in the post next week.  The orange runners are next on my list.  Want to see them?  Course you do.  Here they are. 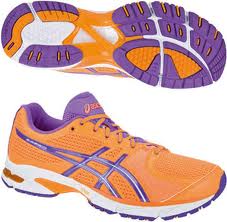 Once upon a time I spent one hundred pounds on proper, real leather trousers.  None of your shiny, black bin bag type thing. A proper brown, more suede than leather pants.   I wore them to death.  I loved them.  I still have them.  They are one of three items of clothing I will never part with even if they only fit one leg now.

A hundred pounds back then was huge money.  The trousers were a huge investment. A huge treat for myself.  Today I am treating myself to running bra’s and orange runners.  I never thought I would see it.

But I also would have bet good money that 7am would see me still curled up in my bed, given half the chance, and not out in the dark, wearing a hot pink high viz jacket and clocking up some k’s before the kids wake up.

That was me this week.  Crazy or what?  But you know what?  It’s great!  Given the choice I would rather run at 7 in the morning than 7 in the evening.  It really does Set You Up For The Day and also, it’s done and dusted.  Out of the way and I’m not spending the rest of the day wondering if I actually will get a chance to run later.

Another morning I felt guilty for giving up the opportunity to get out that early so when Smallest Boy went for his morning snooze, I lapped the garden for a half hour.  Juno came along with me and spent the rest of the morning panned out on the couch.  It was nice to have the company and I got a little glimpse into the future when hopefully, she will tag along on a summers evening.