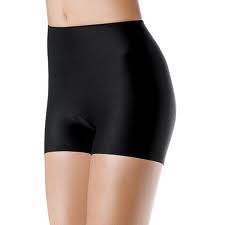 “The difference between “Try” and ”Triumph” is just a little umph!”  Marvin Phillips

So there are lots of little ways to cheat when it comes to hiding the excesses.  As a child, I remember a contraption called a roll-on.  Not an anti – perspirant with a little ball on the top of the bottle, but a garment that a lady would be squez into.  And I mean squez!  (Is there such a word as squez?)

As a child, it looked a bit torturous to me and I always wondered what awful thing the lady had done that warranted such a terrible fate.  Now I know.

She went and had kids.

I think roll-ons are called something different today.  Spanx would be one name. Bandeaux control slips would be another. I prefer the term panel beater.

I found a leaflet the other day.  Smallest Boy was raiding my underwear drawer again and he unearthed it.  It was a leaflet I was given from the hospital over three years ago on stomach exercises post C-section.  It did help me in the early days but it’s not early days any more.

By all accounts when you have a baby, there is a garment that can be of great benefit to you afterwards.  It helps to pull everything back in place.  I’m not (just) talking about loose flesh, it also aids the abdominal muscles that have separated to accommodate the growing baby.  Those muscles will come together in time but for some women, it’s not quite so simple.

When I was being fitted for a nursing bra some years ago, the lady in the shop told me about it.  I had never heard of this contraption before.  She said the African ladies were very informed about its benefits and were her best customers.

I didn’t buy one.

One of them is Date Night.  It will be one whole year, count them, 12 months, since Mister Husband and I went out together.

In honour of both occasions I went out and bought a dress.  A lovely, in keeping with the festive season, purple dress.

When I say it really quick like that, it doesn’t seem so bad.  What?  You can’t read it?

Ok.  Have a look at this first.

That is my dress.  I have come a long way in 18 months but I still need a little back-up to wear it.  So I bought a bandeaux control slip.  As back up.

My roll on.  My Spanx.  My panel beater.

I am not even hanging my head in old aged shame.  There comes a time in ones life when one needs one.  Wise words from my younger sister.  Who has something similar.  Who doesn’t have kids.  Who is more than a decade younger than me.

If she wears one, there’s no hope for yours truly.

This week I realised I had to take myself in hand.  For the first time in ages, since the summer, I let a week pass without getting out for a run.  Smallest Boy has a different routine now and doesn’t sleep until later in the morning, if at all, which means I can’t even run the garden.  In desperation, Tuesday night, I dug out the DVD I had been given last Christmas, strapped on the shock absorber and a leggings, and spent three quarters of an hour working out my frustration with my old pal Davina.

Her last DVD has 8 different sections on it so I picked the one I thought would suit my mood the most: Brilliant Boot camp.  It was mega!  Mega mega!  Loads and loads of weights in it.  My favourite thing.   I came back into the kitchen afterwards, flung my arms wide and announced “Mammy’s back lads.  And she’s cured!”  A smart arse in the corner muttered “Thank Christ!” but I ignored him.

And the good stuff just kept on happening.  I got a text from my sister in law bright and early on Wednesday morning, offering her baby sitting services if I wanted to get out for a run!  Did I what????  As she put it herself, it worked both ways; I got my run in and her kids were entertained by mine for an hour.  (Not that I was running for an hour!)

It was fantastic.  Sometimes a run after a little break can be amazing.  I wasn’t tired.  I paced myself from the get go, didn’t increase it and as a result my run was smooth and thoroughly enjoyable.  It was also lovely to see the gorgeous German Shepherd in the field at the top of the road hadn’t forgotten me.  I gave a quick whistle as I came round the corner and the barking started.  I could see him running along the fence and then tearing back to me when I got round the bend.  He keeps me company as I run past the fence, wagging his tail and barking.  His new friend stood there watching with interest but didn’t join in.  I wonder will there be little German Shepherd puppies in the New Year.

This reminds me people, I said I would do this Fat Bird thing until Friday 7th December.  That is just two weeks away.

To date I have lost 9 pounds!