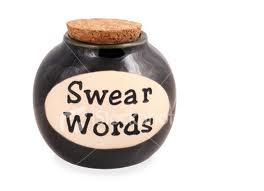 One of my earliest memories is my father getting me to spell S-H-I-T-E.

It was in the church car park after mass and I can remember his friend being suitably amused.  I remember all of it and also having no idea what they found so funny.

However, I knew exactly what I was doing the time I wrote “fuck off, Ann” on a blackboard and deliberately left it where my mother could see it.

It was in the kitchen and I can remember my mother being suitably annoyed.  I remember all of it and also being absolutely disgusted because I was sent to bed early as a punishment.

Kids swear.  They just do.

They’re only words and kids have a pesky little habit of repeating what they’ve heard from someone else.

It’s all a big game.

Like the one myself and Lovely Liam play.  We don’t call it anything but strictly speaking it’s our rhyming game.

Like all kids, he loves when words and sentences rhyme.  The funnier the better.

Our favourites are:  Starvin’ Marvin’.   Know what I mean, jelly bean?  Love you lots like jelly tots.  Later gator.  Zip it. Lock it. Put it in your pocket.  And our new one; Chin up, buttercup.

We play this game a lot.  So much so Smallest Boy is now a dab hand at it.

Although the other day he added one of his own.  He added fucker face.

Oldest Boys jaw dropped in genuine shock and disbelief when he heard it so that’s him off the hook.

No reaction from Shy Boy who was glued to the TV so the jury’s still out on him.

Lovely Liam quite possibly uttered it at some stage but given his lisp it would have sounded like sucker face.

It reminded me of that day in the church yard when I was doing my party piece and suddenly I got why my father’s friend found it all so funny.

But a bigger part of me was horrified.  And a bit relieved.

See, Smallest Boy was saying “boggix” much too regularly for my liking and as bollix is my go to cuss word, naturally enough I was getting the blame.

But now he seems to have forgotten all about “boggix” in favour of his new expression.

Maybe I could get away with inventing a lisp for Smallest Boy and blaming that.  Maybe I can chance telling people he is a fan of a certain Gaga lady and one of her songs.

It's only when your kids swear, you realise how often you do it yourself.

The other morning Smallest Boy was getting into "the fucking car." I really have to stop. I'm getting to the stage now where I don’t even notice I'm doing it anymore.

But I get such release from a good old expletive or two-wenty.