How Not to Scold Your Childer 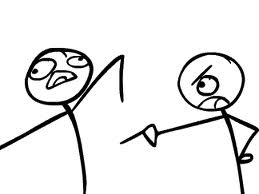 So, at the risk of repeating myself, it was the last week of the summer holidays and I was determined to pack in as much as we could.

I don’t like these play centres for the main reason they cost money, are indoors and I have to literally chase the boys in order to keep an eye on them.

But, there is one such indoor play centre not too far away from me, where I can sit and sip a frothy cappuccino as the boys are running riot within my line of view.

This place is called The Big Blue Barn.

And true to form the lads were absolutely, scrape them off the ceiling hyper the morning I promised them a visit.

Shouting, roaring rude words at each other, teaching Smallest Boy how to say moron, poopyhead, idiot, and in general being total pains in the ass.

I lost count of the times I told them there would be no treats forthcoming that afternoon if they didn’t calm down and stop shouting and in general, just behave themselves.

I’m not great in the mornings.  My boys wake up absolutely fizzing with vitality and volume.  It is not a good idea for me to neglect to eat something as it makes my tolerance levels non-existent.

But I have still to learn that lesson:  Eat something.  Even if it is a handful of dry cereal.  Eat It!

The lads were reaching only-dogs-can-hear-you-volume and I grabbed the first blurry boy that ran past me.

“If you lot don’t calm down this very minute, there will be no trip to the Blig Blue Blarn.”

I also suffer an inability to speak properly when I am hungry.

I heard a muffled snort behind me and in a poor attempt to save face, I left the room.

I could hear them, hear them mocking me.