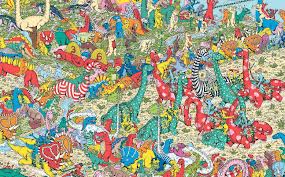 Lovely Liam doesn’t quite get the Eye Spy concept.  But he’s only four years old thus not able to spell.  Also not being colour blind would help a lot.

We were driving along a narrow country road, perfectly and beautifully canopied by a green ceiling, courtesy of Mother Nature at her glorious June best.

It was just too obvious.

I watched Shy Boy in the mirror as he desperately tried to come up with something else that began with the letter T.  God love him.  He failed miserably.

And so began a little game.

I took it upon myself to invent a memory game for the end of the week so I could wheel it out in the car on a journey.

I would ask them all a question about something that happened during the last five days and see if they could remember.  For example, I lost my car keys and after 24 hours I finally found them.  Where were they?  And remember when we were going to the Big Blue Barn but it was too busy so we decided to go somewhere else instead?  Where did we go?

I neglected to come up with a buzzer system.  So naturally enough He Who Knows Everything and drives his younger brother insane with frustration, kept piping up and answering all of the questions.

One of the most annoying yet endearing things about being seven and a bit more than a half is you are all knowing and confident with it.

And one of the most frustrating things about being five and a good bit more than a half is you get shouted down all of the time.

I promise, Shy Boy.  Tomorrow morning when we play our game in the car, I will have at least two questions that only you will have the answer to.

One of the best things about being quiz master, is you get to bend the rules a little.

Even if it is hugely frustrating for some.