Drunk as a Skunk 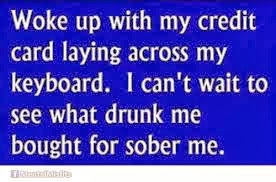 One time I got so drunk there was a real fear they were going to have to break down the cubicle door to get me out.

I was sitting on the ground and making silent “I’m in here, I’m in here” words while my sister banged on the other doors looking for me.  I was unable to move which was odd because everything else was moving.

Another spectacularly drunken episode was on a sun holiday in September.  I was so sick I thought I wouldn’t be allowed onto the plane for the flight home.

I couldn’t even think about alcohol without retching after that one, let alone swallow some.

And there were various occasions in between.

Once I almost concussed myself as my stomach was being purged of its contents into the toilet.

They were not pretty times.

And naturally enough, after each and every occasion, I swore I was never, ever drinking again.  And in fairness to me, I didn’t.

I always gave it at least five working days before I eased myself back into it.  No point in rushing these things.

Then I discovered I was with child.

That child, followed swiftly by his brothers, changed my social life for quite a while.

For about seven years in fact.

There were a lot of drunks in the house during my sabbatical, however.  Little drunks.  But the drunks in question were about 13 months old and learning to walk.  The exception being
Lovely Liam who refused with admirable stubbornness, to take his first step until he was 17 months old.

And gradually, as the boys grew and the sleep issues began to sort themselves out, I started to find myself again.

To date I haven’t found the disgraceful, scuttered drunk me and that, I think you will agree, is a very good thing.

I have previously admitted to enjoying a small bottle glass of wine in front of my favourite brain drain Aussie soap opera, Home and Away, at the weekends.

Sometimes I check out YouTube and watch make-up tutorials.

Make-up was something I had a massive interest in “back in the day” and I have many memories of doing my mother and sisters’ faces for various events.

My own wedding being one of them.

These days I consider myself good to go if I remember to smudge on some tinted moisturiser or BB cream in the mornings.

Now I am learning all about stippling brushes, a scary concept called contouring and how to find the perfect red lipstick for my skin tone.

Haven’t found it yet.

But I did find a lovely channel on YouTube run by two sisters called Samantha and Nicole Chapman, otherwise known as Pixiwoo and they are amazing altogether.

Professional make-up artists they make it all look so easy and there is something for everyone on their make-up tutorials. 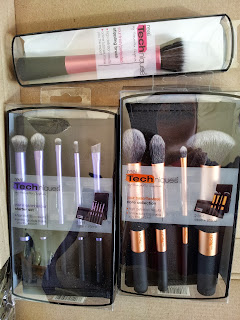 These are what drunk me bought sober me one night when Home and Away was finished and there was still half a bottle one large glass of wine left.

Not only was I prepared to be contacted by my financial advisor/Mister Husband/sober me and told there had been suspicious activity on my account because items other than school books and kid paraphernalia had been purchased; I was also horribly guilty at spending that much money on myself.

On what are effectively toys, really.  Absolutely non essentials.

But I wanted them.

And now I have them.

Except now, now I want to extend my actual make-up collection.  One tinted moisturiser, a BB cream, one light foundation, a half dozen similar looking eye shadows and my beloved Avon eyebrow pencil are putting my gorgeous new “make-up tools” to shame.

Looks like sober me will have to hide the debit card on drunk tipsy me in future.

I bought the brushes on amazon and all sober opinions are my own.  I have not been paid or asked to mention any product on this post. (Unfortunately as sober me would love that)