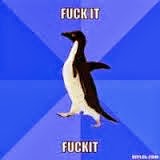 So I’ve got a fukit list.  Not to be confused with bucket list.  You know, a list of the things we want to do before a certain birthday or literally before we die.

As someone who never had the fabled five year plan, I certainly wasn’t going to waste time with a bucket list so the fukit list was born instead.

I haven’t been able to draw breath since school went back after the summer holidays.  A cement block has taken up residence in my chest and the wall calendar is a mess of scribbles, so much so I’ve had to write up a separate sheet for each week with all the extra activities on it.

That’s right. A separate sheet for each week.

It reached crisis point one day when my phone had the power to make my chest tighten with a “what now?” dread every time it rang.  I toyed (and still do) with the thoughts of getting rid of it altogether.

But then how would the school contact me?  Like the day Oldest Boy got stung on the face.  And the time Shy Boy fell over, procuring an impressive bump on his forehead and tearing the sides of his nose.

So I still have it.  My phone.  But only just.  It’s on its last chance.  Stop ringing or else.

You get the picture.  But I did make a serious fukit list too.

I wrote down everything; my hobbies, my guilty pleasures and the things that actually need doing.  Then I gave them all a number in order of priority.  And stress level.

The top ranking one in both categories didn’t come as a huge surprise.  It was my boys.

My plan was to lob a few from the list and items causing the most stress and of least importance were for the chop.

The boys won that one by the skin of their teeth.

In the end social media fell foul of my cull.  I stopped preparing blog posts during the day but this just added to my resentment levels.

Who knew there could be so many levels when it comes to sanity?  I didn’t.

I’ve been playing it by ear.  I still race about like a headless chicken and regularly have breakfast at elevenses time.

But I have been making time for exercise and am already feeling the benefits.  A couple of things are coming to their natural end this month so I will be released from the stress of those.

I am attending a Control Your Stress course mid-week which is excellent.  At the most I will be able to get rid of that cement block and at the very least, it is ninety minutes all to my very own self on Wednesday evenings.

I had great plans to sneak into a Parent Your Teenager course last evening but the absolute stress of trying to go for a run and wash the aforementioned crust off the boys beforehand, won that battle.

But the first item on my shopping list is baby wipes.  Lots of them.