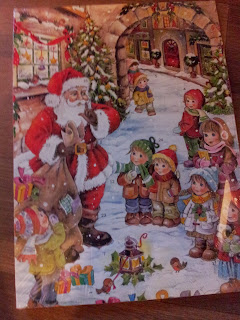 The advent calendars came into the house, I think, on the day we took down the Halloween decorations.

They were at the “you couldn’t leave them there” price of 99c in Lidl the German supermarket.

To say they were scoffed within minutes of getting into the house wouldn’t be an exact untruth.

All except Oldest Boy who displayed impressive restraint and decided he wanted to keep his for when it was “really advent” and have one a day in the countdown to Christmas “like you are supposed to.”

And he did.  For an entire week.

He kept to his word and ate one every day.  Usually as soon as he got up each morning.

I still don’t know how he managed to pinch out a chocolate in front of his younger brothers and eat it without anyone noticing.

However, I knew it was only a matter of time before the calendar was discovered.  Hiding it on the sitting room table in full view of anyone who even glanced in its direction was just asking for trouble.

Or perhaps I jinxed it with my advice/order for him to move/hide/take it upstairs before the smaller boys found it.

Either way, he neglected to listen.

Lovely Liam found it and helped himself to “just three.”

I quickly stopped him before he could start in on Santa’s moustache, the next days’ breakfast chocolate, and he took himself off to the couch with a grin on his face and a smear of chocolate on his guilty ass puss.

That’ll soon be wiped off your face, I thought.

But did I really want to be there for that particular shit fit?  What to do.

I remembered there was an extra advent calendar still in storage under the stairs and decided Oldest Boy could have that one as a reward for the way he exercised such admirable discipline and didn’t savage the entire calendar.

And to prevent the inevitable meltdown when he discovered his advent calendar had been burgled.

Mister Husband had another idea.

“Fek him.  He’s been told often enough to pick up after himself.  He needs to learn this is what happens when he leaves his stuff lying around.”

As much as I am dreading the discovery of the stolen chocolate bauble and cat, he does need to learn the consequences of ignoring his mammy not putting his belongings away.

Update:  I was hoping he would discover the calendar the following morning when I would not be alone to deal with his outburst but he discovered it the night before purely by chance.  When he realised three windows were open and empty, he was almost sick with outrage, temper and frustration.  I felt for him because all of that emotion was too much for his body to handle and it spilled over in the form of gulping, snotty, gasping tears.  He stamped and stomped and shouted a little bit.   I gave him his minute, to let it all out of his system.  Then he rounded on Smallest Boy, accusing him, and I had to have words.  They did not go down well but that calendar was moved without further ado and I haven’t seen it since.
at 19:13